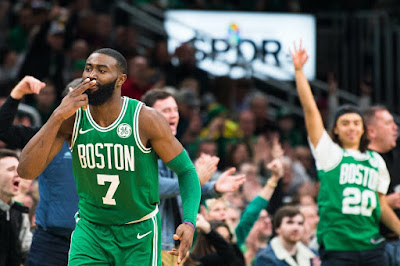 The Celtics did what they were supposed to do Friday night at TD Garden when they stretched their winning streak to five at the expense of the Cavaliers in a 127-117 win.

30 games into the season, beating sub .500 teams has become an ongoing pattern for Boston. In the past, this wasn't always the case for Brad Stevens-led teams.

Last year, the Celtics dropped a handful of games against teams with losing records this deep into the season. However, pairing two of the league's youngest rising stars -- two guys that played through the trying year in Boston -- along with All-Star veteran Kemba Walker has paid dividends. The result is the Celtics' perfect 12-0 record against teams that lose more often than they win and Friday night was an impressive display from two of the franchise's most promising figures.

With Jayson Tatum and Jaylen Brown leading the way, the Celtics own the second-best record (22-7) in the Eastern Conference, the fifth-best in the league and the duo made history Friday when they became the third youngest Celtics duo (behind Bill Russell/Tommy Heinsohn & Paul Pierce/Antoine Walker) to each score 30 or more points in a single game.

Jaylen Brown picked up from where he left off in Toronto, scoring 12 of the Celtics' opening 24 points in the first quarter. Fresh off his 30-point Christmas Day performance, Brown took advantage of Cleveland's defensive switches, caught fire from behind the arc -- where he drained a pair of 3-pointers -- and finished in transition.

And his scoring out of the gate was contagious. Jayson Tatum, who had a lackluster performance against the Raptors (11 points on 5-of-18) Wednesday, went off for 15 second-quarter points on his way to a 21-point first half outbreak.

This all spelled out trouble for the Cavaliers. To their credit, Cleveland's Kevin Love (21 points) and Collin Sexton (13 points) combined for 34 points while the Celtics took a 15-point lead into the half but the Cavs didn't go down as easily as initially expected -- they managed to trim their lead to nine just before the final frame -- but the Celtics' 23-and-under duo wasn't done.

For the first time in their careers, Tatum and Brown both finished with 30-plus points in a single game. Brown scored a career-high 34 points, including back-to-back fourth-quarter threes that put the nail in the coffin for Cleveland. It's also his second consecutive game in which he scored 30 or more points.

Prior to the start of the regular season, many wondered if Tatum and Brown could both perform at a high level without getting in the way of one another and now the answer is an astounding yes with an explanation point for good measure.

It's the first time Brown has ever scored 30-plus on back-to-back nights and over his last five games he's averaging 26.4 points on while shooting at a impressive 60.1 percent clip and scored 25 or more points in four of those five outings. Meanwhile, Tatum is putting up 26.7 points a night throughout that same span while scoring 30 or more points in two of his last three games.

The two are not only performing at a high level, most importantly, those efforts are translating into wins.


"People put us together a lot," Tatum said. "Drafted back-to-back. He's two years older than me so we're closer in age -- the two young guys. We've been through a lot together. He's in year four, I'm in three. It's fun for both of us to play well and contribute to winning and hopefully we can keep it going."

When Tatum and Brown are both asked about the chemistry between the two, it's difficult for them to pinpoint why they've been so successful alongside each other. They haven't quite figured that part out, there isn't a clear cut answer, however, the results speak for itself.

Brown is just hoping the two can keep it up.


"We just play basketball," Brown said. "I think both of us together, it's hard for teams to scheme and stop us both. We just try to come out and be aggressive and days like today they couldn't stop either of us. But we have to keep going."

Both teams shot over 50 percent from the floor (BOS: 51.6/CLE: 51.8) while the Celtics stretched their streak of out-rebounding opponents to seven after finishing Friday night's game with a plus-5 advantage (43-38) against the Cavaliers on the glass.