Do the Celtics need a 'clear hierarchy' when healthy? 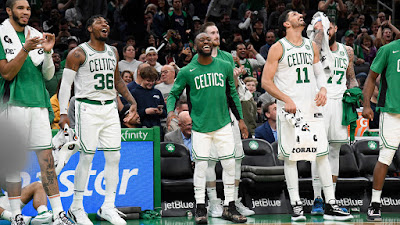 In an interview last week with ESPN's Rachel Nichols, Danny Ainge may have given us a glimpse of his vision of a championship-caliber Celtics team.

In his response to Nichols' inquiry about lessons learned from last season, Ainge suggested that in the future he would be "a little more careful going into building another team that had such EQUAL depth. The Lakers have really good depth."

"I do think it was my fault."
1-on-1 with Danny Ainge on what went wrong last year with Kyrie, how the front office pivoted to find an even better fit in Kemba Walker, and how his time with Larry Bird & Kevin McHale affected his reaction to Gordon Hayward's latest injury. pic.twitter.com/uw3gz5viVx
— Rachel Nichols (@Rachel__Nichols) November 26, 2019


Ainge clearly emphasized the word "equal" then cited LeBron James and Anthony Davis as the two clear cut stars of the Lakers and then went on to stress the importance of a "clear hierarchy."


"Last year, we had eight guys - nine guys - that all thought they were equal to each other, said Ainge. "It makes it easier to accept roles when there is a clear hierarchy."

Ainge's quotes are important in reference to possible trades or alternate moves prior to the NBA trade deadline on Feb. 9, 2020. It was clear last season that Brad Stevens was force-feeding a recovering Gordon Hayward back into his system, and the Celtics youngsters most likely weren't thrilled with that. Jaylen Brown and Jayson Tatum felt they were Hayward's equal (there's that term again), and with Hayward not at 100-percent, they probably were right.

Well, the equality dilemma might not get any better this season as Hayward, in his eight games prior to his hand injury, was notching 18.9 points, 7.1 rebounds and 4.1 assists per game, while hitting 56-percent on field goals, 43-percent on 3-pointers and 84-percent on free throws. Brown, Tatum and Marcus Smart are having career years. Where's the hierarchy? Who's the alpha? The talent-gap between players has diminished, and Ainge once again could be facing what he calls "such equal depth."

Ainge clearly pointed to the 19-3 Lakers as having no-nonsense leadership. No other Lakers player can legitimately challenge James or Davis on a talent level or a question of leadership. Is that what Ainge is seeking for his Celtics? Does he have a problem with too much equality? This will start to play out soon when Hayward returns to the lineup within the next week or so. If the equality issue persists, look for Ainge to make a move. If things run smoothly, as they did when Boston had it's full roster early on in the season, we won't see any major moves.

Either way, it should be interesting as the season goes on for this deep Celtics roster, who are currently 15-5 after the first 20 games.