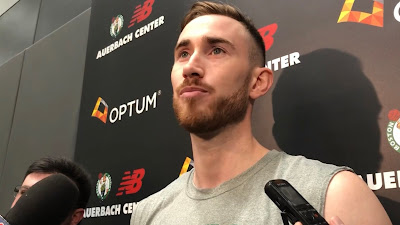 Gordon Hayward completed simulated contact drills with Celtics coaches on Tuesday, as he continues to recover from a bone fracture in his left hand.

The Celtics forward spoke to the media following the team's practice at the Auerbach Center and gave an update on his injury.

"I think it's going to be a little while, and plus I was right-hand-dominant anyway. So it's definitely going to probably not be the exact same, but get it more strengthened so the percentage is closer to my right."

Hayward injured his non-shooting hand when he collided with LaMarcus Aldridge during the Celtics win over the Spurs in San Antonio back on Nov. 9 and underwent successful surgery two days later, as it was reported he'd be sidelined for approximately six weeks.

Hayward expressed last week that he was progressing ahead of schedule, but did not mention a possible return date. He also anticipates some sort of pain in his hand for the better part of the season going forward.


"It's definitely something where, hopefully not the rest of the season, but certainly a lengthy part of the season, I'm going to have to continue to get treatment, continue to ice it and kind of manage some of the symptoms," Hayward said. "I don't want it to get hit again, but I'm sure it will get hit again, and when that happens, it'll be sore. So I'll manage that."

More than likely Hayward will have to wear some sort of padding on his hand that he's not looking forward to because it may affect his shot. However he is beyond grateful that he's been able to maintain his conditioning during the last several weeks.


"It's been great," he said. "This injury is nothing compared to the last one. Any time you just injure something in your upper body, at least you can be doing legs and moving around. Jumping, that's huge, in my opinion."