Danny Ainge on Gordon Hayward injury: 'Will probably practice with the team this weekend' 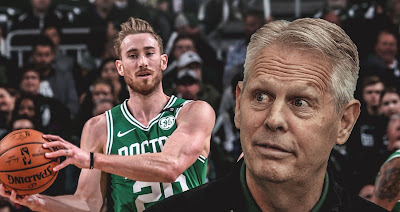 The Celtics are 15-5 after 20 games into the 2019-20 season and without Gordon Hayward, who has missed the last 12 with a fracture in his left hand.

Danny Ainge made his weekly appearance on Boston's 98.5 The Sports Hub Thursday and gave Celtics fans some hope as to when Hayward could officially begin participating in his first team practice.


"Gordon is progressing on the court. He'll probably practice with us this weekend, Saturday," Ainge said. "I don't want to get ahead of myself and get too excited about it but I think he's progressing really well."

Hayward seems like he's ahead of schedule, as he's been seen doing simulated drills with coaches at the team's practice facility -- the Auerbach Center and before Celtics home games.


"I played a little kind of like hybrid contact today with coaches and stuff," Hayward explained on Tuesday. "I kind of wanted to start there. Coaches aren't quite NBA players. I know some of them played basketball prior. But before getting to that level I wanted to just kind of get comfortable using my left hand in live situations, which I did and that went well."

Saturday would mark exactly four weeks since Hayward collided with Spurs forward LaMarcus Aldridge. If he does practice this weekend, a possible return to the Celtics lineup could come as early as Monday when the team hosts the Cleveland Cavaliers at TD Garden. But Ainge didn't elaborate on any exact return date for Hayward, who was  set to miss approximately six weeks following his surgery.

Despite Ainge or Hayward not wanting to set an official return date, it seems likely the Celtics forward will be back in Brad Stevens' lineup sooner than expected, which was originally on Christmas Day against the Toronto Raptors at the earliest. Either way, that's good news for Boston, who are currently 8-4 without Hayward so far.