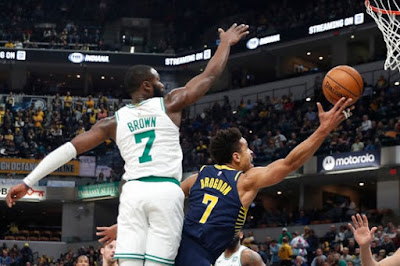 It was an impressive feat for Indiana, a team still making plenty of noise in the second-tier of the Eastern Conference amidst the Bucks, Sixers, Heat and the Celtics, who they topped, 122-117, without its All-Star point guard, Victor Oladipo.

Here are four things we learned from Wednesday night's game.

Offensive production from the Celtics' bench has been a concern this season but if there's one thing they've done a good job of recently, it's been limiting opposing second units. Unfortunately, that wasn't the case in Indianapolis Wednesday night when the Holiday brothers caught fire.

Aaron and Justin combined for 35 points on 15-of-23 attempts. The brothers not only outscored the Celtics' second unit by 16 but they also helped erase a 10-point deficit in the fourth quarter and prevented Boston from capitalizing on significant leads throughout the middle frames by draining attempts from behind the arc -- where they connected on 5-of-9, they were responsible for half of the Pacers' threes on the night. They were also responsible for 20 (Austin, 13) of the Pacers' 38 fourth-quarter points.

With no Marcus Smart (eye infection) and Gordon Hayward (nose), who exited the game midway through the final frame, Brad Stevens was scrambling for defensive lineups to slow down the Pacers in the final two minutes. We saw him turn to Brad Wanamaker (12 points, 6 rebounds), Carsen Edwards, Grant Williams and Javonte Green but when Justin Holiday found the bottom of the net on an open 3-pointer with 1:21 left, it made it a two-possession game (114-109) -- a gap the Celtics never fully close despite pulling to within one point with only 10 seconds left.

After the Celtics tacked on 37 third-quarter points while only allowing 23, and took their 10-point lead into the final frame, the Pacers returned the favor by outscoring Boston, 38-23. Behind Kemba Walker's 39 points through three quarters, the Celtics built a double-digit lead but Walker cooled off while the Holidays nearly outscored their entire opponent in the frame.

Walker went 4-of-7 in the fourth quarter, including a potential game-tying shot from deep that was well-contested and resulted in an air-ball. His 44 points marked a new season-high for the All-Star point guard but when the Celtics' defense failed to close out the perimeter and rotate on assignments, the momentum flipped. Jayson Tatum and Jaylen Brown tried to pick up the slack.

Brown's 3-point attempt that would have put the Celtics ahead before the 3-minute mark fell short and Tatum made two trips to the free-throw line while the Pacers locked him down from getting clean looks. But when it came down to the final shot Brad Stevens gave the ball to Walker, and you can't blame him for doing so. For Boston's defense -- that's top-5 in fourth-quarter points allowed (28.9) -- to allow 37 points is inexcusable and dangerous against a team like the Pacers.

3. Malcolm Brogdon Can Hold His Own in Marquee Matchups

No Victor Oladipo, no problem for the Pacers. Indy has held its own without its All-Star point guard, so much so that the Pacers currently sit just outside the top-5 in the Eastern Conference, which is only 2.5 games behind the second placed Heat. Malcolm Brogdon has a lot to do with that.

He's the reason the Pacers are in no rush to bring back Oladipo. Brogdon is keeping things afloat in Indianapolis, averaging 19.5 points, 7.5 assists per game and most significantly for the Celtics Wednesday night -- dropped 29 points on 6-of-10 from the floor. He meticulously dissected the defense, caught defenders on up-flakes and drives to the rim where he absorb contact and made constant trips to the free-throw line -- where he scored more than half of his points.

Brogdon was a perfect 15-of-15 from the charity stripe to go with a pair of 3-pointers, 8 assists and two steals.

4. Pacers Will Be a Threat Down The Road

Wednesday's win against the Celtics was the Pacers' most impressive win of the season, thus far. Without Oladipo, they've struggled against elite talented teams such as the Rockets, Bucks, Sixers and Clippers but match up nicely against Boston.

Brogdon adds another wrinkle as a two-way player who can defend the Celtics' backcourt while being an ideal partner alongside Oladipo in the backcourt as an outside scoring threat who can also penetrate and finish at the rim. However, the Pacers' second unit is where things also get interesting in contrast to Boston.

Not having Marcus Smart out there Wednesday to give us a better look at how these two measure up doesn't give us the whole picture but things will be much clearer in its next meeting when the Celtics return to Indianapolis in March. Still, keep an eye on the Pacers this season.

The free-throw shooting differential played a big part for the Pacers, it gave them the edge they needed to complete their comeback and destroyed Boston's momentum. Indiana made 30-of-36 from the line, where the Celtics went 17-of-22. Indy's defense also drew 12 personal fouls on Daniel Theis and Jaylen Brown -- which forced Brad Stevens to go deep into his bench to make up for their ejections.