J.R. Smith on apologizing to Jae Crowder: 'He may want to wait on that' 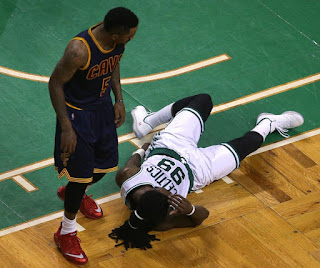 Tension from last season's playoff series certainly carried over to Tuesday night's game between the Celtics and Cavs.

Before Tuesday night's game, Crowder told reporters that he was still waiting for Smith to apologize for what he did the last time they played each other. After the game, Smith was asked if he was going to say sorry to Crowder.


"He might want to wait on that," Smith said after the game. "He can hold his breath, though. I'll give it to him sooner or later.

"Because it wasn't intentional how they try to make it seem," Smith said. "If you play chippy, chippy things are going to happen. It is what it is. It's pretty ballsy to ask for an apology from another man. I respect it."

Although Crowder stated that he wanted an apology from Smith, he wasn't going to necessarily 'hold his breath,' and by the end of the game Crowder didn't have any malice towards Smith.


"It happened months ago," Crowder said. "You live with it, and you go on."

Before tip-off, both teams didn't shake hands or greet each other.


"I really don't try to shake nobody's hands that are on the other team anyway," said Smith. "I've got a lot of friends I play against all the time, and I don't shake their hands  before a game. After a game it's a different story, but before a game it's strictly business. Nothing personal. I think a lot of people look at it that way, as well."

The Celtics will face the Cavs again at Cleveland on on Feb. 5 and Mar. 5.