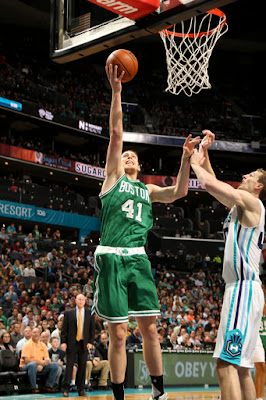 Behind a steady defense and a second-half offensive surge, the Celtics beat the Hornets 102-88 in Charlotte on Wednesday night, improving to 11-9 against the East and 8-6 on the road.


Overall, the C's leapfrogged the Hornets (15-13) in the standings and improved to 16-13, keeping pace with the rest of an Eastern Conference pack of 11 teams separated by just 4.5 games.

The Hornets rallied in the fourth quarter, but never led once throughout the night. Nicolas Batum's 3-pointer brought the Hornets to within six points before the Celtics finished them off with a 10-3 run in the final three minutes to clinch the win. Kelly Olynyk's team-high 20 points led a group of four C's with 18-plus points. Jae Crowder notched his third straight double-double (19 points, 12 rebounds), while Isaiah Thomas and Avery Bradley each scored 18.


"Obviously, when we've played like that, we've usually won," Stevens said. "I thought our starters really played well. I thought a lot of our guys on the bench did a really good job.

"I thought it was a pretty good performance overall. We responded to their runs, went on runs of our own, and I thought we played pretty well tonight." [AP]

Frank Kaminsky's 23 points led the Hornets, and Batum added 17. The Celtics offered Charlotte a cache of first-round picks in hopes of moving up to select Justise Winslow, but Michael Jordan turned down the deal to draft Kaminsky.

While Amir Johnson is nursing a left foot injury (plantar fasciitis), Olynyk has filled in nicely. He finished with 20 points on 7-for-10 shooting, adding nine rebounds to finish as a plus-16 on the night. This is the second straight game he's replaced Johnson in the starting lineup. In those two games, Olynyk has averaged 19.5 points and seven rebounds.

The Celtics played a well-rounded game against the Hornets. While four players netted 18-plus points, others stepped up in a number of ways other than putting the ball in the hoop. Jared Sullinger pulled down 10 rebounds, Evan Turner finished scoreless but had five assists, and R.J. Hunter had two steals in 18 minutes on the floor.

The Celtics head into Christmas break on a high-note and will have a few days off before heading to Detroit to face the Pistons on Saturday night.