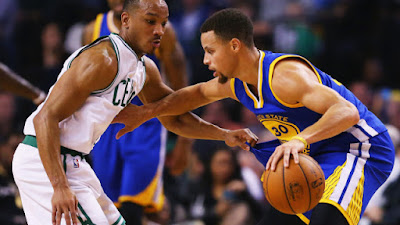 In a double-overtime thriller, the Warriors fended off the scrappy Celtics and stretched their undefeated record to 24-0 in a 124-119 double overtime win.

After Avery Bradley got off to a hot start in the first quarter, knocking down six of his first seven shots, Kelly Olynyk picked up the slack in the second half. The C's erased an 11-point deficit in the third quarter, Olynyk hit a fade-away jumper with 2:07 left, giving the C's a five-point advantage -- their biggest of the night. 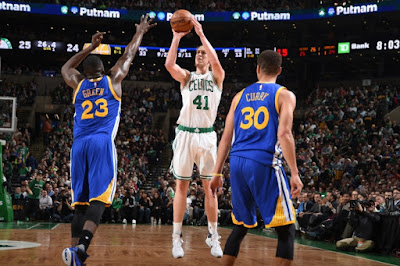 But the Warriors fought back, thanks to a three-pointer and a pair of free throws by Curry, the Warriors tied the game. Thomas had a chance to win the game for the C's, after coach Stevens elected to not call a timeout, but had his three-pointer deflected in the final seconds of regulation.

The Celtics had another chance to win the game at the end of the first overtime. With the game tied at 110, Jared Sullinger grabbed a crucial rebounds with 23 seconds left. Stevens again chose to not call a timeout. Thomas drove and missed a jump shot in the paint with 1.8 seconds left.

The Celtics' offense struggled in the second overtime, they shot 4-of-11 from the floor but were within three points with 14 seconds left. Following a timeout, the Celtics found Crowder in the corner -- where he missed a game-tying three.

After the game, Celtics coach Brad Stevens explained why he elected to play without a timeout and had no regrets about his decision.


"Both times I wanted us to come in, slip out of a pick and roll, and just play," Stevens said. "Because you let [the Warriors] get set, they're so long, they switch things, they make it really difficult on you as you saw even in side-outs. They're very physical. And we had the ball with unique time, because all I would do is call something, get it in, and run the clock down.

"Obviously, the first regulation shot got blocked, so that's not as good as the second one," Stevens explained. "The second one was a great move, great look. If you got a chance to beat those guys on that look, I think you'd take it every time."

Bradley did a phenomenal job guarding Curry. Although Curry netted 38 points, it took him 27 shots to get there. After Bradley fouled out in the beginning of the first overtime, Curry scored six more points throughout the overtime periods.

Curry spoke about how impressed he was by the Celtics after the game.


"Their record is about .500, obviously, but they've played better than their record I think," Curry said. "They've got some big wins on the road against some tough teams, OKC, Atlanta. When they win, they win big. They've really stood out. They have that punch and they have that firepower. They provide a couple of match up problems with a couple of bigs that can step up and shoot threes, space the floor. You don't really know where it's coming from on a nightly basis, which is tough."

Although the Celtics' play resulted in a loss, this game could be a turning point for the C's. Besides a visit from LeBron James and the Cavaliers at home next Tuesday, the schedule does ease up a bit -- giving the Celtics a chance to catch up in the standings. They will round out the month against teams like the Pistons, Timberwolves, Knicks and Lakers.

Celtics won't have a lot of time to dwell on this double-overtime defeat, as they head to Charlotte to take on the Hornets Saturday night.

The Warriors crushed the Celtics from the charity stripe -- a statistical category that played a big role in their win over the Celtics. Golden State shot 79.5 percent from the free throw line on 31-of-39 shots. While the Celtics shot 56.2 percent on 9-of-16.