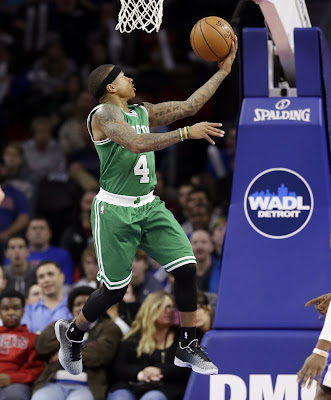 The Celtics avenged last week's loss to the Pistons on Saturday in a 99-93 win, and improved to 9-6 on the road this season.


Celtics shot 46.4 percent from the floor, while holding the Pistons to 38 percent shooting, and scored 50 points in the paint.

Andre Drummond had a monster double-double and made it look easy. Drummond finished the night with 22 points and 22 rebounds -- his fifth 20-20 game of the season, and Reggie Jackson scored 17 points for the Pistons.

After missing two games due to plantar fasciitis in his left foot, Johnson had a solid night for the Celtics. He scored 12 points on 6-of-7 shooting, and pulled down eight rebounds in 28 minutes.

Celtics outscored the Pistons 25-15 in the third quarter and opened up a 16-point lead in the fourth quarter -- their biggest of the night. The Pistons then went on one final run towards the end of the game. After Jackson topped of an 8-3 late fourth-quarter Pistons run to cut the Celtics' lead down to two points with 30 ticks left, former Piston Jonas Jerebko hit his only field goal of the night to seal the win for the Celtics.


"The clock was winding down, and they were sinking into the paint, and I got open," Jerebko said. "I knew I had Steve Blake on me, so I knew I could get the shot off, and I made it." [AP]

Although Jackson managed to score 17 points against the Celtics, he was 5-for-15 from the floor, committed three turnovers and was a minus-2 on the night. Kentavious Caldwell-Pope, who scored a season-high 31 points in the last meeting between these two teams, had a miserable night. He shot 3-for-13 for six points, including 0-for-5 from deep and committed a team-high five turnovers.

The Celtics did a good job defending the Pistons back court despite giving up 46 points in the paint and being out-rebounded, 51-47.

Celtics will finish out their weekend back-to-back at home against the Knicks on Sunday.

All five starters scored in double figures for the Celtics, and minus Thomas, every starter grabbed at least four rebounds. Johnson and Sullinger led the team with eight boards, and Crowder had seven. The C's are now ninth in the league in rebounding, they average 44.3 boards a night.