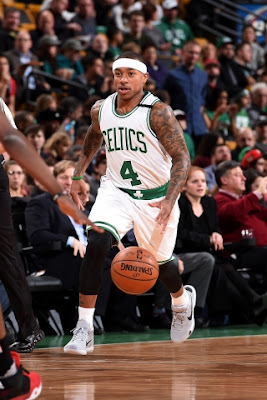 Behind eight Celtics in double figures and 54 points in the paint, the C's beat the Bulls 105-100 at TD Garden.


After finishing the first half without a point, Isaiah Thomas still managed to score a team-high 20 points, including nine in the final three minutes. Jared Sullinger notched another double-double (10 points, 16 rebounds), Kelly Olynyk (15) and David Lee contributed off the bench, Jae Crowder and Evan Turner each added 13 and Amir Johnson finished with 12.

The Bulls (42.9) shot a better percentage from the floor that the Celtics (41.3) but committed 16 turnovers. The Celtics created separation behind Thomas' fourth-quarter scoring push and limited the Bulls defensively on the opposite end.


"We just want to keep playing well and keep getting better and make the most of our opportunity," Turner said. "Right now, everybody throughout the whole NBA, except for a couple teams, are in one big bunch. Right now, we're just trying to break out the bunch, record-wise, and keep the momentum and play well."

The Celtics (13-9) are now tied with the Toronto Raptors for first in the Atlantic Division. Only the Cleveland Cavaliers (14-7) have more wins in the east.

The Celtics will look to make it three in-a-row on Friday night when they take on the undefeated Golden State Warriors.