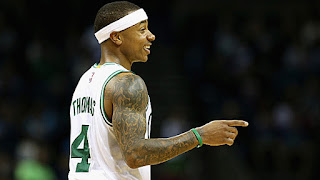 After a grueling double-overtime loss to the Warriors, Isaiah Thomas, Avery Bradley and the Celtics bounced back to beat the Hornets at Charlotte, 98-93.


After a slow start in the first half, Bradley scored 16 of his 23 points in the second half and Isaiah Thomas added 13 of his 21. Thomas also finished with more than half of the Celtics' assists (25) -- he had a career-high of 13. Jae Crowder added in 16 points and seven rebounds, he was a plus-20 on the night.

Nicolas Batum scored a team-high 21 points for the Hornets and Kemba Walker finished with 16.

The Celtics knocked down seven three-pointers and built a 12-point lead -- their biggest of the night, in the third quarter while outscoring the Hornets, 35-27. The Hornets came roaring back in the fourth quarter, taking a three-point lead with under four minutes to go.

The Celtics then went on an 8-2 run before Kemba Walker's pull-up jumper cut the Celtics lead to one with just 13 seconds left, but that turned out to be the last points for the Hornets as the C's held on in the final moments.

The Celtics are now 4-1 on the second night of back-to-backs.


"We have been awfully good on the second night of back-to-backs, for whatever reason, on the road," Stevens said. "So we have a lot of confidence that we are going to, if we struggle early, we will find that second wind. We're not going to make any excuses." [associated press]

The C's will get to a couple of days rest before hosting LeBron James, Kevin Love and the Cavaliers at home on Tuesday. It will be the first time the Celtics have faced the Cavs since being swept by them in the first round of the playoffs last season. The C's are currently two games behind the Cavs for first place in the Eastern Conference.

The Celtics did a great job of taking care of the ball -- they committed only five turnovers. C's also outscored the Hornets 42-28 in the paint.