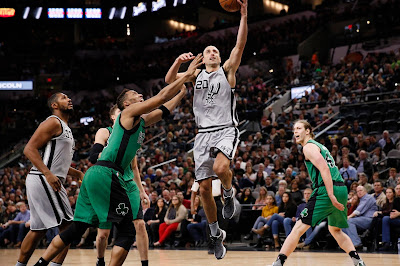 Behind superior defense and efficient offense, the Spurs reminded the Celtics why they're one of the best teams in the league, fending off the C's late-game comeback and remaining unbeaten at home with a 108-105 win.

But the Celtics didn't go down without a fight. They challenged the Spurs' transition defense, outscoring San Antonio 28-3 on fast-break points. After the Spurs opened a 15-point lead at the end of the third quarter, the C's pulled within two with a 14-1 run midway through the fourth quarter.

Avery Bradley (18 points) missed a go ahead three-point attempt with eight second left -- the Celtics' last chance to pull of the upset, since their last-second, full-court pass resulted in a turnover. Isaiah Thomas scored a game-high 23 points, and Evan Turner added 16.

Ginobili scored 15 points (6-11 FG) to go with seven rebounds and four assists. He was the biggest thorn in the Celtics' side during the second half. When Ginobili's fadeaway jumper towards the end of the third quarter extended San Antonio's lead to 15, it felt like the game was out of reach for the Celtics. But after the C's trimmed the lead to two, in came Ginobili off the bench. He gave his team enough breathing room to keep the Celtics from tying the game in the final minutes.


"I think this game will help us get better because I thought they moved better without the ball," Spurs coach Gregg Popovich said. "They executed what they wanted to do better than we did. We just had an experienced group that executed some stuff down the stretch. It got us over." [ESPN Boston]

While the Celtics were fighting to stay alive at the end of the fourth, coach Brad Stevens called a timeout with 1:40 left, and then called a second timeout 15 seconds later -- leaving him with just one to finish the game. This turned out to be a crucial decision. Trailing 104-102 with 18 seconds remaining, the Celtics had an opportunity to set up a game-winning play. Instead, Stevens opted to keep his final timeout, and his team created on the fly. Bradley's rushed and errant 3-pointer was the closest the Celtics came to giving the Spurs their first loss of the season.


"The bottom line is we played really well and gave ourselves a chance to win," Brad Stevens said. "But we have to be even better in our margin. I've been very careful in saying 'If we play well, we will have a chance to win.' And the reality is, we didn't." [associated press]

The Celtics are now 2-2 on their five-game road trip. They will look to finish the trip with a 3-2 record on Monday when they travel to New Orleans to take on the Pelicans.