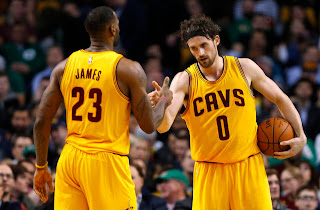 Led by LeBron James and Kevin Love, the Cavs' offense outscored the Celtics in the second half and pushed themselves to a 89-77 win at TD Garden on Tuesday.

The Cavs kicked off the second half on a 17-4 run. After the Celtics took a 46-40 lead into halftime, the Celtics' offense was flat in the last 24 minutes. The C's were outscored by 18 in the last two quarters and shot 26.2 percent.

LeBron James scored a game-high 24 points to go with his seven rebounds and two steals and Kevin Love finished with 20 points, eight rebounds and five assists.

Cleveland shot 51.3 percent in the second half. The Celtics did get the looks that they usually make but couldn't get them to fall. In the fourth quarter, Thomas and Turner both missed driving layups and open jump shots.

After the Celtics were down by six points midway through the fourth quarter, the Cavs extended their lead to 12 to end the game.


"At the end of the game, when you're trying to come back, you're trying to whittled the lead away, they can just get a matchup they like and then keep you at bay because of their talent," Celtics coach Brad Stevens said.

The Celtics will face the Pistons at Detroit on Wednesday, where they hope to bounce back from their 12-point loss to the Cavs.

The Cavs outscored the C's 44-24 in the paint. Celtics did a good job of taking care of the ball (10 turnovers) but couldn't stop the Cavs from scoring down low. Especially, LeBron James -- he scored most of his 24 points near the basket.