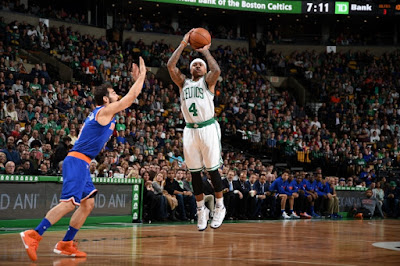 For three quarters, the Celtics sat comfortably ahead of the Knicks before New York found its rhythm in the final frame -- but the C's fended off their hosts in a 100-91 victory.


The C's defense coerced the Knicks into bad passes and off-balance shots, forcing eight of the Knicks' 13 turnovers in the third quarter and building a double-digit lead. Offensively, the Celtics got a lot of players involved, making it difficult for the Knicks to stop the bleeding.

In the fourth quarter, New York scored in transition and from the free-throw line to cut the C's lead to five before Boston's 10-6 run in the final four minutes clinched the win.

Carmelo Anthony led the Knicks with 29 points and 10 rebounds, and rookie Kristaps Porzingis (16 points, 12 rebounds) also finished with a double-double.

Thomas scored 10 of his 21 points in the fourth quarter, including eight of the Celtics' 10-6 run in the final minutes.


"We need him to be a good playmaker for us," Brad Stevens said. "I think he would tell you it wasn't his best day, he did make the biggest plays to push the lead from five to nine. That gives you a little bit of a comfort level."

Crowder was a force on both ends of the floor, holding Anthony to 11-of-26 shooting on the defensive end and knocking down three of his five 3-point attempts offensively. He finished with a game-high plus-13 rating.

Marcus Smart returned from his foot injury and came off the bench to relieve Thomas. Smart scored six points and dished out one assist in 13 minutes of play.

Behind transition offense, the Knicks went on a 7-2 fourth-quarter run to cut the Celtics' lead to five midway through the fourth quarter. They crawled back from a double-digit deficit by getting to the free-throw line and hitting 3's on fast breaks. Outside that stretch, when the C's needed an improved transition defense, they did a solid job defending.

The Celtics will look to make it five wins in-a-row on Wednesday night when Kobe Bryant will make his final visit to Boston.

The Celtics did an excellent job of cleaning up the glass. Other than Avery Bradley (1 rebound), all of the Celtics' starters grabbed at least six rebounds. Kelly Olymyk pulled down a team-high nine from the bench. Thomas' eight rebounds led the starters. Jared Sullinger and Jae Crowder each had six and Amir Johnson pulled down seven.