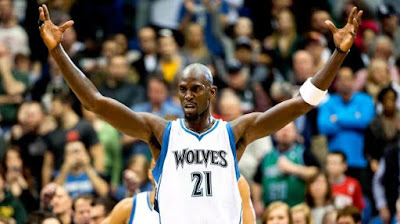 Fresh off a 15-point win at Brooklyn, the Timberwolves (11-16) will face an injury-ridden Celtics lineup at TD Garden on Monday.


Garnett was seen outside the visitors locker room with a big smile on his face. KG greeted reporters, Garden employees and former teammates in the hallway before heading inside the Timberwolves locker room.

It's always great to see Garnett back in Boston, where he helped lead the Celtics to an NBA title in 2008. While speaking to former teammate of that championship team-turned TV analyst Brian Scalabrine, Scal asked Kevin, "How's everything?"

Garnett has been a mentor to rookie standout center Karl-Anthony Towns and the rest of the young Timberwolves. As a starter, Garnett has taken KAT under his wings and so far it's been a success.

The Celtics are going to have their hands full in the paint. Towns averages 9.1 rebounds and 2 blocks per game to go with a team-high 15.7 points. Center Gorgui Dieng is also a rebounding threat and so is Garnett -- who is averaging 4.8 boards a night. The Timberwolves rank tenth in the league in rebounding.

Fortunately for the Celtics, Garnett will be sitting this one out. KG usually doesn't play on the second night of back-to-backs and tonight is no different.

Marcus Smart, who is still nursing a foot injury won't be the only Celtic in street clothes tonight. Amir Johnson (left foot plantar fasciitis) is out for tonight's game. His foot was bothering him over the weekend, he was ruled out this morning. But he isn't the only Celtics who won't be in action.

Jared Sullinger (back spasms) is also out for tonight's game. Sullinger, felt discomfort in his back after Saturday's practice and is ruled out to play against the Timberwolves.

Without Johnson and Sullinger, it'll be up to Olynyk, Lee and Tyler Zeller to protect the rim against the Timberwovles' bigs. The Celtics will also have to pick up their offense in this one. Look for Avery Bradley to bounce back from his recent slump and for Jae Crowder to continue his hot streak; he's averaging 16 points and 8.5 rebounds in his last two games.