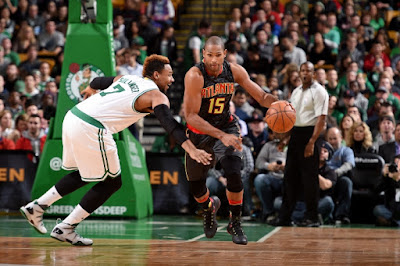 The C's made costly mistakes throughout the fourth quarter and couldn't find their offense in the last two minutes, as the Hawks took a seven-point lead -- their biggest of the night. The Hawks shot 46.6 percent from the floor and committed just 12 turnovers.

"We didn't collapse on the ball, didn't stay attached to our man on the perimeter and gave them easy buckets in the paint," Crowder said. "Never made them make the extra pass but little defensive breakdowns cost us."

On the anniversary of the trade that brought Crowder to the Celtics from the Mavericks, Crowder celebrated with his second double-double of the season. He played the hard-nosed defense that has made him a fan favorite in Boston, but fouled out in the game's final minutes when the Celtics were desperate for a steal.

It was a group effort, as the Celtics bench combined for 30 points. Olynyk (8 points), Turner (8 points), R.J. Hunter (8 points) and Daivd Lee (6 points) all took turns scoring, but the Celtics struggled to defend the paint. Hunter hit a pair of fourth-quarter 3-pointers that staked the C's to a five-point lead, but Atlanta's 11-point run kept the Celtics at bay for good.

The Celtics will have the weekend off before hosting the Timberwovles on Monday. The C's have now lost three out of their last four games.

The Hawks scored 68 points in the paint. 68. Paul Millsap (20 points) and Horford were a handful for the Celtics in the post. The C's couldn't slow them down in the second half and also struggled to defend the Hawks' back-door cuts -- which led to easy layups in the fourth quarter, when the Celtics were outscored 38-28.