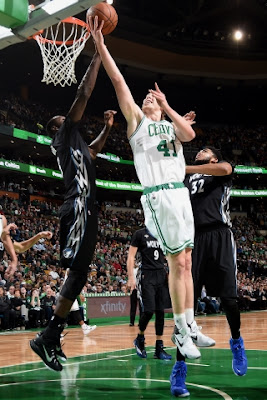 With former Celtic Kevin Garnett back in town, the Celtics snapped their three-game losing streak Monday night by beating the Timberwolves, 113-99, in front of a raucous crowd at TD Garden.

Although Garnett (rest) wasn't playing, it didn't stop Celtics fans from sporadically chanting his name throughout the night. On the floor, Kelly Olynyk scored 19 points and led six Celtics in double-figures. Olynyk filled in nicely for Amir Johnson (left foot) and went 3-for-3 from long distance.

Jae Crowder added a double-double (18 points, 10 rebounds) for the Celtics, and David Lee -- who replaced injured power forward Jared Sullinger (back spasms) in the starting lineup netted 13 and pulled down eight rebounds.

Without their top two rebounders (Sullinger, Johnson), the Celtics were a plus-14 on the glass (50-36). They controlled the pace of the game throughout the first quarter and it carried over to the second half where they opened up a 22-point lead. 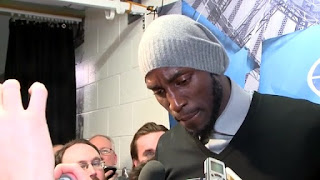 The loudest chant for Garnett came in the fourth quarter when fans yelled out, "K-G! K-G!" after fans chanted "We want KG" throughout most of the game. Fans at TD Garden certainly showed their appreciation to Kevin -- who helped lead the Celtics to an NBA championship in 2008.

"I definitely heard all the chants," Garnett said. "It meant a lot to me. I would like to say Minnesota made me a young man and I grew up when I came to Boston."

TD Garden then showered him with a standing ovation during the last timeout when the jumbo-tron played 'Gino' -- a Celtics celebratory ritual for lopsided victories; one that KG loved to watch throughout his six-year tenure with the Celtics. Garnett acknowledged the crowd with a salute and a big smile.

"That was like the cherry on top for me," Garnett said. "My teammates were asking, 'What is this?' I said, 'I'll explain it later.'"

Celtics are back in action Wednesday night on the road against the Hornets.

The C's offense did a great job of mixing in their scoring from outside while scoring points in the paint against the Timberwolves. C's shot 48 percent on 12-of-25 shooting and scored 44 points in the post.