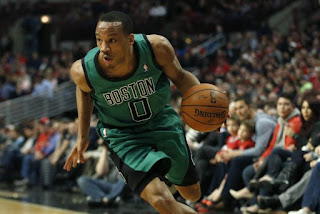 If the Celtics want to close out their five-game road trip on a high note, they're going to have to do it without some of their rotation guys.


According to CSNNE's A. Sherrod Blakely, Avery Bradley did not participate in team shoot-around this morning and is considered questionable for tonight's game against the Pelicans. David Lee, who wasn't in action against the Spurs last Saturday night, will miss his second consecutive game. Lee is nursing a heel injury and is considered day-to-day.

And the Celtics will also be without rookie R.J. Hunter. Hunter has a left hip flexor injury -- an injury he suffered in yesterday's practice.

After clinching their first playoff berth in four years last season, New Orleans is off to a rocky start this year -- due to injuries. Guard Tyreke Evans, a key player for New Orleans, played his first game of the season last Tuesday and their all-star, Anthony Davis, suffered a left shoulder injury just last month.

The Pelicans (5-15) are coming off a dramatic overtime win against the Cavaliers -- a game where New Orleans blew a 12-point lead in the last two minutes of regulation. The Pelicans are hungry for another win and are going to be a tough team to beat.

Davis is having another great season -- averaging 24.2 points, 11 rebounds and is the second-best shot blocker in the league (2.6). Tyreke Evans' (14.7 points, 9.3 assists) production certainly makes them a better team so the Pelicans are very happy to have him back this year. And Eric Gordon (17 points) is also a scoring threat for the Celtics. Gordon had an injury-plagued season last year, his return was a big reason why the Pelicans pushed themselves into the eighth seed of the playoffs. Now that the trio is back together, New Orleans is looking to trend up in the competitive Western Conference.

Rebounding over Davis and defending the perimeter will be crucial for the C's. Davis, Gordon, Evans and Jrue Holiday can all knock down threes. And their best three-point shooter -- forward Ryan Anderson, can certainly get going from behind the arc if you don't stretch out and cover him. Anderson is averaging 18 points and shoots 37 percent from three.

Expect to see more of Tyler Zeller and some Terry Rozier in the back court, especially if Bradley isn't in the lineup. Bradley, who is averaging 20 points and shooting 50.8 percent from the floor in his last four games, will most likely play tonight. With the way he's been shooting throughout this road trip, I can't imagine Avery not playing so my guess is -- he suits up.

Either way, the C's are going to have to rely on the rest of their 11 guys (possibly 10) if they hope to finish their five-game road trip, 3-2.