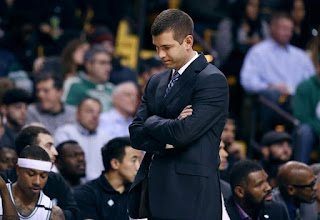 were the first words out of Celtics coach Brad Stevens after Friday night's 109-101 loss against the visiting Hawks.

Losers of three straight, the Celtics (14-13) took a significant step back in the past week. Before their big showdown against the NBA champion Warriors on Dec. 11, the Celtics were two games behind first place in the east. Now, if the playoffs started today, the C's would be on the outside looking in. They're tenth, five games behind the Cavs for first.

Thomas was asked if the Celtics need another go-to scorer and replied:


"We could use one. Our team is fine the way it is right now but we could always use another guy who can put the ball in the basket consistently."

Of course, another go-to scorer would be a great addition to the Celtics but this team has been able to win games this season just the way they are.

No other Celtic has been more consistent than Thomas. He's averaging a team-high 21.4 points and leads the team in assists (6.6). The Celtics don't really have another consistent scorer. Avery Bradley, the Celtics' second leading scorer, was on a hot streak but has dramatically cooled off. Bradley is 4-for-16 for nine points in his last two games. Before then, Bradley scored 17, 23 and 19 against the Cavs, Hornets and Warriors.


"There has been different things teams have done, but he's had success against different kinds of defense," Stevens said about Bradley. "The last few teams have put a big focus on him and that'll continue because he's one of our better scorers."

Although the Celtics struggle to find consistency from players not named Isaiah Thomas, they're one of the best defensive teams in the league -- a big reason why they've won 14 games this season. Their great defense leads to their good offense. Celtics lead the league in opposition turnovers (17) and are second in steals (10). But in their past three games against the Hawks, Pistons and Cavs, the Celtics are only averaging 12.3 forced turnovers and five steals per game.


"I don't think we're playing with the same type of swagger," Jae Crowder said after Friday night's loss. "[The Hawks] starting building that swagger within themselves; you started hearing them yell and talk and be excited. We don't show any passion, any excitement anymore. We have to get back to that."

Before losing four of their last five games, the Celtics seemed to had found their rhythm. Celtics went 4-1 leading up to their double-overtime loss to the Warriors -- it was an impressive feat, they beat the Bulls, Kings, and Pelicans by at least 10 points or more.

It's going to be very important for the Celtics to get back on track, they cannot afford to fall behind in the east. After they host the Timberwolves on Monday, Celtics will go on a brief two-game road trip at Charlotte and then Detroit.