Kevin Garnett & Gino together again, maybe for the last time 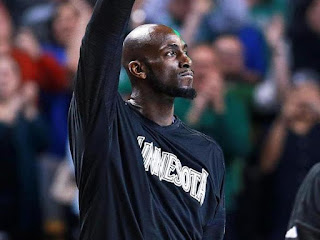 Not even Kevin Garnett could tell you if Monday night was the final game of his career at TD Garden.

He wouldn't say but jokingly thanked reporters, smiled and walked away after the question about his NBA future was asked. Instead, KG talked about how great it felt to be back in Boston.

He also talked about how he felt when Celtics fans chanted his name, how much the city means to him -- a place where he says he 'grew up' after 'becoming a young man in Minnesota' as he said, and he of course, talked about 'Gino'.

After Celtics coach Brad Stevens spoke to the media before the game, reporters walked down the hallway towards the media room and there was Kevin -- standing outside the locker rooms, waiting for a familiar face to chat with.

Garden employees, reporters, writers, coaches, trainers, and former teammates rejoiced at the sight of Garnett. The passionate, hard-working, friendly, future hall-of-famer who spent six seasons in Boston, led the Celtics to their 17th championship in 2008 has a lasting effect on people he used to talk to throughout his tenure in Boston.

Although his Timberwolves suffered a 113-99 loss at the hands of his former team, Garnett had a great night in Boston on Monday.


"Boston has always been a special place in my heart, it probably always will (be)," Garnett said. "Tonight wasn't the outcome I wanted it to be, but it was a great homecoming and felt really good to be in the building."

With a big lead in hand TD Garden's faithful waited for 'Gino time' -- a Celtics celebratory cigar that plays on the jumbo-tron towards the end of lopsided victories. For six seasons, KG loved it. But when the Timberwolves went on a 10-3 run, trimming their deficit to 12 with 1:51 left, no one was sure if a 12-point deficit was a big enough lead to trigger Gino.

Two possessions later, Avery Bradley made a 3-pointer -- opening up a 15-point advantage. Rubio then missed a jump shot and Celtics had the ball with 1:02 left when Celtics coach Stevens called a timeout.


"Sure. Yeah, that's what I was thinking the whole time," Stevens jokingly said. "No, I was subbing but in retrospect that was a hell of a call. Sorry. No, I didn't know. I mean, I didn't even think about it. I heard them chanting him the whole game so I didn't really figure that that was going to come into play, but I'm sure glad it did."


"That was classic," Garnett said. "That was like the cherry on top for me!"

Later in the interview came the inevitable question that Garnett has been asked for the past 2-3 seasons, "Is this the last run through for you?'


"I just want to thank you guys for everything... It's getting hot in here, and on that note I'm exiting."