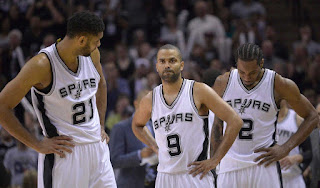 If the Celtics (11-8) are going to avenge their Nov. 1 loss to the San Antonio Spurs -- it's going to take a season-best defensive outing to get it done.

The Spurs (16-4) haven't lost a game at home this season and are currently the second best team in the NBA, behind the undefeated Golden State Warriors (20-0). Because of their great defense, the Spurs lead the league in fewest points allowed (88.5).

San Antonio's top-notched defending is led by Defensive Player of the year Kawhi Leonard, who is having a great season. He is averaging 22 points, 7.5 rebounds and 1.8 steals per game.

Although the Celtics are among one of the better defensive teams in the league -- giving up 97.5 points per game (6th in the NBA), they cannot let the Spurs jump out to a big lead. The Celtics' offense shouldn't be a concern if the defense steps up. When the C's defend at a high level, their offense simultaneously heats up -- it's how the Celtics have won each of their 11 games, so far.

In their last meeting against the Celtics, Spurs newcomer LaMarcus Aldridge dominated. His game-high 24 points and 14 rebounds led the Spurs and prevented the Celtics from making a late run in the fourth quarter. The Celtics have to keep him outside of the paint. Although Aldridge can knock down 15-foot jumpers, he does most of damage in the post. Jared Sullinger and David Lee will have their hands full. They're going to need help from Amir Johnson, Kelly Olynyk and expect Tyler Zeller to get some minutes.

The Celtics have to make frequent trips to the free throw line against the Spurs. The Celtics only attempted three free throws against the Spurs last month, and the Spurs' defense is going to try to limit the C's once again tonight. It's tough to get calls against such a great defending team like the Spurs but players like Jae Crowder, Jared Sullinger and Isaiah Thomas need to aggressively take it to the hoop and get themselves in a rhythm from the charity stripe.

Fresh off his best performance of the season at Mexico City against the Kings (20 points, 4 rebounds, 4 assists), I'd be very surprised if we see Kelly Olynyk's hair down at San Antonio. The man-bun was in full effect against the Kings and so was Olynyk's confidence. He was sinking in jumpers from the moment he checked into the game. Olynyk shot 9-of-12 from the field, including 3-for-5 from three. The Celtics need that kind of production from their bench.

Olynyk, alongside Evan Turner and David Lee, anchor the bench and need to score against the Spurs if the Celtics are going to score 88 or more points. If the C's can score at least 90 points against the Spurs, they will have a good chance of handing the Spurs their loss at home.