Rajon Rondo on winning a title with the Los Angeles Lakers: 'It's been a long time for me' 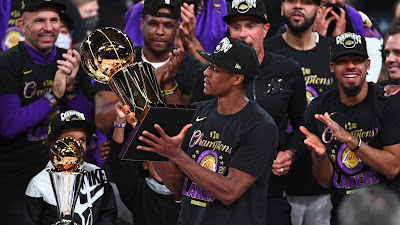 It's been 12-years since winning his first NBA championship with the Celtics and Rajon Rondo can now say he's a two-time champion after winning a second ring, but this time with the Los Angeles Lakers.

The former All-Star point guard became only the second player in history to win a championship with the Celtics and Lakers joining Clyde Lovellete (Minneapolis Lakers and Celtics). Rondo called "This one, by far, is the hardest one," given the time in between titles and of course the circumstances regarding a pandemic over the past 12 months.

"It's been a long time for me," Rondo said in his postgame presser. "To be able to come back and redeem myself and play a big part in this championship is definitely a hell of a feeling, and something I'll remember for the rest of my life."

Rondo admits early success with the Celtics influenced his attitude towards winning after his first championship at age 21 with Paul Pierce, Kevin Garnett and Ray Allen back in 2008 against the Lakers.

"I had a lot of great teammates early, great coaching staffs early, and I thought that's what the NBA was," he explained.

The long road and journey to redemption, which wasn't always a smooth one, led to a  Game 6 of the 2020 NBA Finals, where Rondo finished with 19 points, 4 rebounds and 4 assists off the bench to help the Lakers close out the Heat for the franchise's 17th title -- tying Boston with the most championships in league history.

Rondo had to wait more than 10 years to get back the Finals, following a Game 7 Celtics' loss at the hands of the the Lakers; the last championship won by the Los Angeles rivals and the late Kobe Bryant.

"I got to compete against Kobe Bryant when I was 21," Rondo said. "So, his game and his legacy speaks for itself. Me being a kid from Louisville, Kentucky, to be able to compete with Kobe two years into the league, understand and learn so much from him by watching his film and studying his film, it’s definitely an honor.

"And to come full circle to win in his honor, his daughter's honor, unbelievable season that we've had. And to be able to prevail and stay focused and continue to get the job done, I know something, he's definitely smiling down on us. We're able to fulfill our dream and succeed with the championship."

Still, going 8-of-11 from the field and 3-of-4 from behind the arc Sunday night, Rondo remembers how difficult the previous few seasons have been for him leading up to this one.

"It's been a rocky last couple of seasons," Rondo said. "We didn't get to the playoffs last year. A couple years ago, a teammate got hurt and excited early in the playoffs. So, just staying the course. Never too high, never too low, and continuing to grind. I pride myself on how hard I work. People that know me know how dedicated I am to the game, and my mind and my body, the work I put in in the offseason, and it's definitely a blessing to be able to come out and reap the benefits of what I've been working for for so long."

Rondo at age 34 still continues to break records, recording 105 assists off the bench in the playoffs; the most since 1971 -- even after he missed the entire first round against the Portland Trail Blazers. He moved into the top-10 in overall playoff assists -- currently in sixth, passing Hall-of-Famers Kobe Bryant, Scottie Pippen, Steve Nash and Larry Bird.

With a player option for next season worth $2.7 million, the sky is the limit for Rondo, who also has interest to become a GM or even a coach one day if and when he officially retires.

"I'd love to coach, I love to teach the game," Rondo said to Rachel Nichols before Game 5. "I love putting people in position to succeed, so that is the recipe for a coach. I also don't want to to box myself in. I would love to be a GM as well. Those two are the paths I would like to go down in the future of my career."

Seems like a good time to repost this 1-on-1 with Rajon Rondo - on his fit with LA, why he nearly retired a few years ago...and knowing what it takes to win a title. pic.twitter.com/GpoJzxSmLg