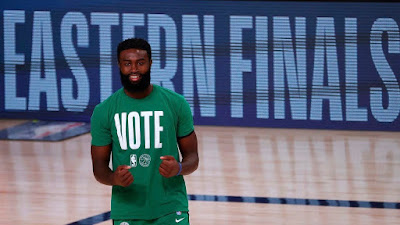 Jaylen Brown made sure his voice was being heard on social issues, especially during his time in the NBA bubble.
The 23-year old Celtics guard, soon to be 24 in a couple of weeks, has been one of the more vocal leaders in all of professional sports over the past six months when it came to social injustice, police brutality and systemic racism.
Brown, who was one of five recipients to be honored with the NBA Cares Community Assist Award earlier this week, has challenged his fellow players around the league to make an impact in their communities once they returned home for the offseason.
While Brown doesn't view himself as a leader or has having any sort of special status, he believes being a professional athlete in the U.S. carries lots of responsibilities.

"I guess [being in the spotlight] doesn't mean as much to me as people would think," Brown said in an interview with Gary Washburn of the Boston Globe. "I think that needs to be normalized. I think that needs to be a redefinition of what a modern athlete is. Yes, we're here to play basketball and entertain, but at the same time there's a lot of influence and responsibility that comes with it, to be honest, especially in American sports."

With the social unrest around the nation and playing sports in the middle of a pandemic, Brown saw athletes stand up against the narrative of "shut up and dribble" and take advantage of their platform to spread awareness, while reaching a worldwide audience.

"I'm not a politician," Brown said. "I'm not a civil rights leader or anything like that, but I do recognize that I have a platform and hopefully I can try to enhance voices that get lost in the midst of things and also enhance all these grass-roots organizations that are devoting their time, energy, and life 24/7 to this. I just really want to enlarge those voices, but it's less so about me, it's about the cause and things we are fighting for."

Whether in Boston or in his native town of Marietta, Georgia, Brown continues to make an impact while acknowledging that he's a role model and is being watched by many young folks who are looking to understand his opinions on how to change current social and racial issues in this country.

"Any time I'm in front of a camera or I know people are going to see me, I always try to think of the people that's watching in my community," Brown explained. "I'm human. I'm young. I make mistakes. I carry myself with the regard that people are going to be watching me and I want them to know that things that are cool now, that are trends, don't have to be trends.

"The cars. The lifestyle. The women. All that type of stuff is cool, but also taking care of your family, speaking on your community, helping your community, using your voice. I want that to be cool, too. Not just who you are dating on Instagram, not what kind of car you've got or house you've got. It also should be cool that you helped your community, that you started a community store in your neighborhood. Those should be flexes, rather than the jewelry or the stuff that's the norm for NBA players."

Brown's passion and dedication for wanting to effect change and playing basketball go hand-and-hand, according to the young Celtics veteran and he assures that he will continue to do both in order to help others.

"I think my I love the game more than I did before," he said. "My love might just ne different from other people's. My love was always attached to the fact that I wanted to be great. But it's great to have influence to bring about positive type of change, that's what pushes me every day, to lead my community that look up to me. That's why I want to be great. I don't want to be great because it's all about me. I want to see my name in the Hall of Fame. That's cool, nothing wrong with that, but my reasons for being great is to help as many people as I can."

A few days ago a public service annoucement was released and NBPA vice president Brown and Celtics teammate Jayson Tatum appeared in the video to encourage people to go vote in next month's election. The "We stand because we have to" campaign in conjunction with Black Players for Change (BPC) is just another example of how Brown and several others will not remain quiet when it comes to matters regarding basic human rights.

"They always want to put a camera in an athlete's face, but they don't want to respect when we have something to say," Brown said. "What's the point of putting a camera in our face?"