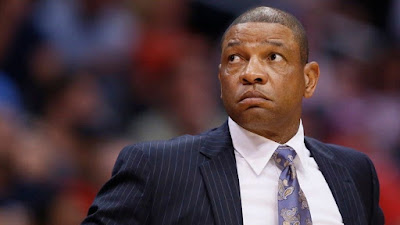 Doc Rivers is returning to the Eastern Conference and specifically the Atlantic Division, as he has agreed to become the new head coach of the Philadelphia 76ers.
According to ESPN's Adrian Wojnarowski, Rivers is set to sign a five-year deal to have a fresh start in Philadelphia.
Rivers came to a mutual agreement with the Los Angeles Clippers on Monday to step down as head coach following the team's loss to the Denver Nuggets after having a 3-1 lead in the Western Conference semifinals and with two years left on his contract
In seven years with the Clippers, Rivers finished with 356-208 record, but only 27-32 in the playoffs and blew a 3-1 lead twice in Los Angeles -- while never advancing to the Western Conference Finals despite having rosters with championship aspirations.
The Sixers' search was focused around former Houston Rockets' head coach Mike D'Antoni before general manager Elton Brand reached out to Rivers on Monday.
Rivers, 58, replaces Brett Brown after seven seasons and a first round sweep at the hands of their division rival Celtics back in August. Part of the attraction for Rivers was the franchise's All-Star duo of Joel Embiid and Ben Simmons. The Sixers have made it clear that they want to keep the young pair together and not trade one or the other.

Welcome to the city of Brotherly Love Coach @DocRivers !!!! Excited for the future and what we’re building here #PhillyForever