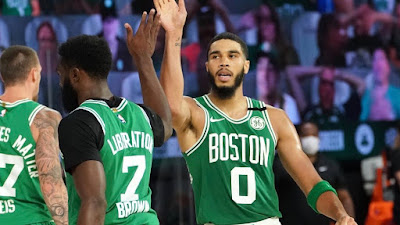 Celtics teammates Jaylen Brown and Jayson Tatum are one of the familiar faces you'll see in the new National Basketball Players' Association (NBPA) public service announcement.
The "We stand because we have to" ad was released Friday in a collaborative-effort with the Black Players for Change (BPC) to encourage people to vote in next month's presidential election.

We stand because we have to.

Use your voice with the @theNBPA and @BPCMLS and get out and vote.

There will be change ➡️ https://t.co/VlO9tcuJcA


Fellow NBPA members Malcolm Brogdon, Andre Iguodala, Austin Rivers and several BPC members from all professional sports leagues appear wearing "Silence is violence" shirts that were designed by Philadelphia Union midfielder Warren Creavalle.
According to a statement released by the NBPA, the video was created to keep conversations going about racial injustice as the election is less than a month away.

"The National Basketball Players Association (NBPA) in partnership with Black Players for Change (BPC) released a joint video today, addressing systemic racism and police brutality by calling for change and civic engagement this November. Written and produced by both organizations, the one-minute video signifies the Players' collective commitment to keep social justice and racial equality at the forefront of the conversation heading into the upcoming election."

While Brown is one of several NBPA vice presidents both he and Tatum have taken an active role when it comes to spreading awareness in and out of the NBA bubble.

"We stand with our brothers from Black Players for Change as a reminder that we will not forget about the victims of police brutality and racial injustice and we will not stop fighting for change," said NBPA President Chris Paul. "We urge everyone to fight with us and use their vote to make a difference in this coming election."

Former Celtic and Hall-of-Fame big man Shaquille O'Neal spoke this week on his "The Big Podcast with Shaq" about how at age 48, he had never gone out and voted until this election.

"You know I always like being honest on my podcast. I've never voted before, America," O'Neal said. "But, now I'm doing all these voting campaigns, and you know one thing I never like to do is be a hypocrite. In other words, America, I voted for the first time, and it feels good."

Though citing the Electoral College and Hillary Clinton losing the previous election, despite winning the popular vote as an example of why he refused to ever make it to the polls, O'Neal now believes it wasn't an excuse not to exercise his right as a U.S. citizen and vote.

O'Neal also produced a public service announcement around the time of the NBA restart and teamed up with Celtics All-Star Tatum to encourage to get registered and vote. The #MyStartingFive Challenge was launched in conjunction with When We All Vote in hopes to increase voter registration and voting participation.

"When we all vote, we have a direct impact on what happens in our communities – from education for our kids to reforming the criminal justice system. We need everyone to make their voices heard in every election, both the national and local elections, and that means using our platforms to spread the word about getting registered to vote. I encourage everyone to join us in challenging their friends, family members, and teammates to register to vote but to also commit to casting their ballots starting in their local elections and in November," said Jayson Tatum.

You can make sure your voice can also be heard along with O'Neal, Brown, Tatum and others this Election Day, which is on November 3rd.