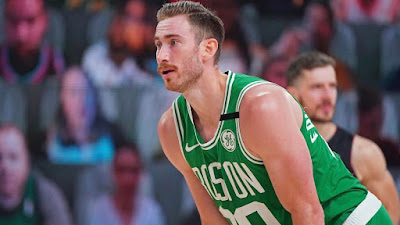 Celtics forward Gordon Hayward was spotted in a social media post sporting a walking boot over the weekend.
His wife Robyn posted a photo of the two of them where he's standing behind her with a walking boot on his right foot.
The former All-Star, who reportedly needed more time to rehab his Grade III ankle sprain, was most likely wearing the boot to help stabilize his right foot after playing on the injured ankle in the last three games of the Eastern Conference Finals against the Miami Heat.


Dan Greenberg of Barstool Sports, posted a snapshot of Robyn Hayward's original Instagram picture of Gordon wearing the boot. The post was later replaced with the same photo that cropped out the couple's legs and the boot was not visible.
Either way, the boot should not be any cause of concern for the Celtics, as Hayward was voted one of the NBA's best teammates during a long and strange 2019-20 season and this shouldn't be anything more than a precautionary measure.
In the meantime, Hayward has a $34.2 million dollar player option that he has to decide on picking up or become a free agent within the next couple of weeks.