Gordon Hayward voted as one of the NBA's best teammates 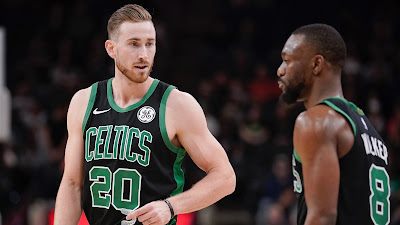 If you believed that only the Celtics were fond of Gordon Hayward, apparently the rest of the NBA thinks highly of the former All-Star as well.
Results for the 2019-20 Twyman-Stokes Teammate of the Year Award were revealed Tuesday afternoon and Hayward received plenty of votes. The 30-year-old finished eighth overall, but was tied for the fifth-most first-place votes.
Guard Jrue Holiday of the New Orleans Pelicans was voted as this year's Teammate of the Year.

Gordon Hayward finished eighth in the 2019-20 Twyman-Stokes Teammate of the Year Award voting. He tied for the fifth-most first-place votes. pic.twitter.com/ck3AYI38YR


Despite missing some time during the regular season and playoffs, Hayward was highly-regarded as a great teammate on and off the court.
Hayward averaged 17.5 points, 6.7 rebounds and 4.1 assists in 52 games played during the 2019-20 campaign.