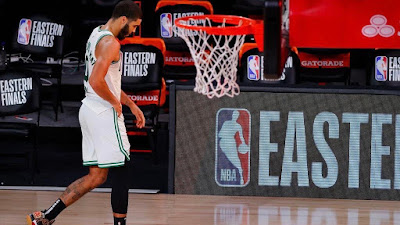 Color commentator and 1981 NBA Finals MVP Cedric Maxwell spoke about the 2019-20 Celtics on Boston's 98.5 The Sports Hub.
Making his last radio appearance of the season, Maxwell weighed in on the team's future when it came to All-Star Jayson Tatum remaining in Boston.
The former Celtic forward was asked if he believed that Tatum, who is eligible for a contract extension, would sign it or not.

"I'm 100-percent confident; I think he loves [coach] Brad [Stevens]," said Maxwell Friday on Toucher & Rich. "I think he loves his teammates, and I think he's just in a great situation that he's become a marquee player. Would you want to all of a sudden say 'Okay, I want to go play with Kyrie Irving in Brooklyn, and become that third?' But then, I think that he's in a unique situation, or he's young. He's the man on this team. He's going to be the man on this team. And he's playing with a great guy in [Jaylen] Brown that I think compliments him so well, and allows him to be who wants to be."

"So yeah — I'm very confident that he stays," added Maxwell.

Tatum is entering his fourth and final year of his rookie deal and the Celtics can offer him a 'super-max' extension that could be worth upwards of $215 million for five years.

Despite Tatum still having a good relationship with former Celtic teammate Kyrie Irving, going as far as talking to the Nets' All-Star while in the NBA bubble, Maxwell doesn't see the 22-year old young veteran leaving Boston anytime soon.

Due to Tatum being selected to the NBA's All-Third Team last month, the Celtics can sign their rising star to more than just a usual rookie-scale extension.

Speaking of the Celtics' short-term future, Maxwell also mentioned that Danny Ainge should look to bringing back fan favorite and Australian big man Aron Baynes to strengthen team's defense in the middle.

"If I had my crystal ball, and I could pick out one guy who really changed what this team has done — and I'm not sure if he's under contract or not, so it's not tampering — but Aron Baynes would have been really a good roadblock in the paint and some toughness that sometimes I don't think the Celtics really had."
"This team was a finesse team," Maxwell added, "and when it came down to power basketball, I think that's when teams just really took them to the woodshed."

Baynes is a free agent and if the Celtics wanted to have a reunion with the center, it is something that Ainge could make happen. Baynes spent this past season with the Phoenix Suns where he averaged 11.5 points, while hitting 35.4 percent of his 3-pointers -- both career-highs and 5.6 rebounds per contest.

The Celtics, Suns and other teams around the league could offer Baynes at least the mid-level exception of roughly $6 million, but his market could also command more after the type of season he just had.

Either way, Maxwell thinks a tough, hard-nose big like Baynes might have made the difference between the Celtics being in the NBA Finals and not the Miami Heat.