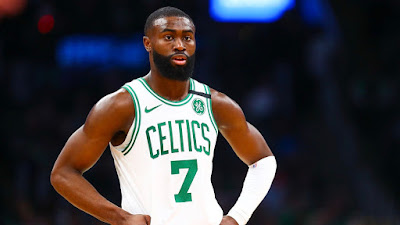 It was quite the 2019-20 campaign for Jaylen Brown, as he not only had a much increased role on the court but also became a well-known leader around the league off of it.
While Brown was the youngest player to be voted as vice president of the NBA Players' Association over a year ago, the Celtics guard has been a prominent voice since -- especially while in the bubble on issues of social injustice and police brutality.
On Monday, Brown was rewarded for his leadership once again after being named one of five recipients of the NBA Cares Community Assist Award winners.

"I'm going to do everything I can while I'm here to pull the next person up." - @FCHWPO pic.twitter.com/vI3KEkmrDJ


Joining Brown in receiving this season's award is Harrison Barnes of the Sacramento Kings, George Hill of the Milwaukee Bucks, Chris Paul of the Oklahoma City Thunder, and Dwight Powell of the Dallas Mavericks.

"This year'ss end-of-season award recognizes five players whose exemplary work advanced social justice and provided COVID-19 relief and support, reflecting the longstanding passion of NBA players to give back to their communities and stand up for the principles of equality, diversity and inclusion," the said NBA in a official statement.

"The five recipients made concerted efforts throughout the 2019-20 season – which extended nearly a full calendar year including the league's hiatus and restart – to leverage their platforms and voices to engage, empower and support different communities amidst the unprecedented coronavirus pandemic and social justice movement following continued incidents of racialized violence against Black men and women. Each winning player will receive $10,000 to their charity of choice, a donation from the NBA and Kaiser Permanente."

Brown, who is the first Celtic since Isaiah Thomas back in 2017 to be given the award, will chose his 7uice Foundation to receive the $10,000 donation as he replied, "There is so much more work to be done," upon receiving the good news.

"Brown has continuously demonstrated leadership in Boston and Atlanta and throughout the hiatus and restart, organizing action and advocating for racial and educational equity," per the NBA's statement. Following the killing of George Floyd, Brown drove 15 hours to his native Atlanta and organized a peaceful march on May 30.  Brown's impassioned advocacy towards social justice inspired the Boston Celtics United for Social Justice campaign, a multi-focus commitment to addressing racial injustice and social inequities in the greater Boston area.

"In response to the pandemic, Brown made a significant contribution to the Boston Resiliency Fund, a city-led effort to assist communities most impacted by the pandemic.  His generous donation provided meals for senior citizens and families most in need, new technology for students as they transitioned to remote learning as well as continued support for first responders. Brown has selected the 7uice Foundation as the recipient of his donation."

Your work in the community and commitment to addressing racial injustice and social inequities has not gone unnoticed. #NBACares pic.twitter.com/EXGgExDboL


Whether organizing a protest following the killing of George Floyd or speaking out on the injustice surrounding the death of Breonna Taylor, this award is well-deserved as Brown continues to display leadership that goes way beyond his 23 years of existence.

"As a young person, you've got to listen to our perspective, said Brown back in May while holding a 'I Can't Breathe' sign during his march for George Floyd. "Our voices need to be heard. I'm 23 years old. I don't know all of the answers. But I feel how everybody else is feeling, for sure. No question."