Should Clint Capela be a Celtics trade target? 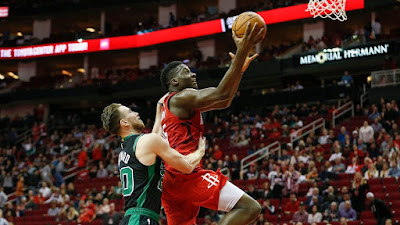 Atlanta Hawks big man Clint Capela is a name that has been associated with the Celtics for the past couple of seasons.
After seeing that there was no answer for Bam Adebayo, as the Miami Heat advanced past Boston to the NBA Finals in six games last month, Danny Ainge may strongly consider trading for a rim protector this offseason.
Capela is a 6-foot-10 walking double-double and a well-known shot blocker around the league, that could be an interesting addition to the Celtics roster and an upgrade at the center or five spot.
While it looks like Capela might not be in Atlanta's future plans, Zach Buckley of Bleacher Report suggests that a trade with the Celtics would benefit both parties. His trade proposal would send Capela to Boston in exchange for Daniel Theis, Enes Kanter, Romeo Langford and the No. 14 pick in this year's NBA Draft.

"Capela had this pact when Atlanta acquired him in February, so there's no reason to think it will scare off the Hawks for next season," Buckley writes. "Still, they probably shouldn't be hyper-focused on the present when they're coming off a 20-47 campaign (and haven't cleared 30 wins since 2016-17) and their best player, Trae Young, recently turned 22-year-old.

"The Hawks wouldn't abandon hope of competing for the 2021 playoffs here, as they potentially add four rotation players. But the top prizes are the 21-year-old Langford and the draft pick, which would be their second of the lottery. This should further brighten the future, plus it makes it easier to commit to John Collins, which feels like a no-brainer when he's 23-years-old and getting 20-point, 10-board doubles-doubles in his sleep."

For the Celtics it gives them an opportunity to acquire a quality proven big in Capela, who averaged 13.9 points, 13.8 rebounds and 1.5 blocks in 39 games played for the Houston Rockets this past season, without having to give up any of their core players in Jayson Tatum, Kemba Walker, Jaylen Brown, Gordon Hayward or Marcus Smart.
Capela was dealt to the Hawks back in February at the NBA trading deadline as part of a four-team, 12-player swap, that also involved Robert Covington heading to Houston.
The move would also leave Robert Williams as the primary back-up for Capela and rookie Grant Williams would have an increased role come his second year in coach Brad Stevens' frontcourt rotation.

"The Celtics, meanwhile, would decide they are one big man – more specifically, one Capela (whom they discussed at the deadline, per ESPN's Adrian Wojnarowski) – away from a title," Buckley added. "They could still liberally switch assignments on defense, he'd add muscle in the middle and the offense would benefit from having a more reliable vertical spacer than Robert Williams III. Boston would also increase its offseason flexibility by thinning out its crowded roster."

Ainge has to be enamored with the fact that Capela has two years left on his current very team friendly deal at $17.1 and $18.2 million per year, respectively.
However, if the Hawks are looking to continue their youth movement, adding Langford -- who showed some promise late in seeding games and playoffs before having season ending surgery on his wrist -- and of course a prospect at the No. 14 pick in next month's draft could end up being a steal for Atlanta. Not to mention getting two experienced young centers in Theis and Kanter is also a plus, while both are on expiring one-year deals at $5 million a piece, that makes them very tradeable for any potential future deals.