Should the NBA adopt FIBA rule on goaltending, basket interference? 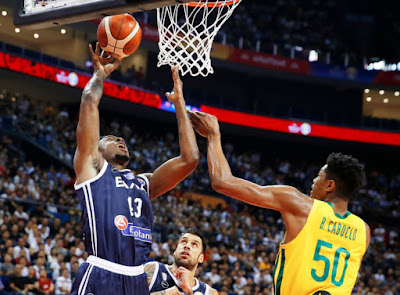 Brazil's 79-78 win on Tuesday over Greece in World Cup competition brings up an important question for Adam Silver and the rest of the NBA. Should the league adopt the FIBA rule on goaltending and basket interference?

Brazil's Bruno Caboclo ended the game by swatting away a third free throw by Greece's Kostas Sloukas as the ball hovered above the rim giving Brazil the victory.


The NBA and FIBA rules are the same on a ball in downward flight towards the basket. A player can not block or touch the ball while it appears to be going through the hoop. The difference in rules comes with a ball above the cylinder itself.


"FIBA: Once the ball strikes the rim, any player can play the ball (i.e. swat it away or tap it in) No blocking a ball in downward flight towards the rim."

"NBA: An imaginary cylinder exists that has the basket as its base. Touching the ball while any part of it is in this cylinder (and still has a chance to go in) is a violation."

Flash back to Game 7 of the 2019 NBA Eastern Conference Semi-Finals pitting the Toronto Raptors against the Philadelphia 76ers. Kawhi Leonard's last second game-winner seemed to hover above the rim forever, while Serge Ibaka, Marc Gasol, Tobias Harris and Jimmy Butler were literally standing around waiting to snag a rebound if the ball ever decided to come away from the rim. But the ball finally went through the net and Toronto moved on to the Eastern Conference Finals.


Look at where Kawhi ends up to watch his game winner bounce in... pic.twitter.com/lc7cA5sFNr
— Darren Rovell (@darrenrovell) May 13, 2019


According to Wikipedia, the NCAA adopted a goaltending rule because of 6'10" center George Mikan in 1944. Then there was a no-dunk rule that came into play for the NCAA from 1967 to 1976, reportedly because of 7'2" big man Lew Alcindor or most may know him as Kareem Abdul-Jabbar, who later changed his name.  I personally hated the no-dunk rule and was glad to see it go.

My vote on the adoption of the FIBA version of the goal tending or basket interference rule is to go with it. Caboclo's last-second swat above the rim was electrifying in Brazil's win over Giannis Antetokounmpo and Greece. What if Ibaka or Gasol had been able to jam that indecisive ball home three months ago in Toronto, or if the Sixers' Harris or Butler had legally swatted the ball away?