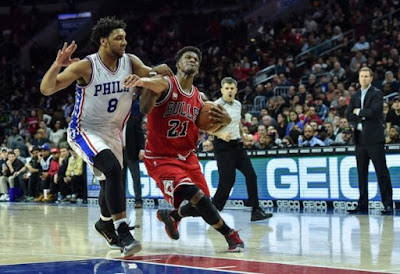 The Vertical's Chris Mannix is not buying it.

Mannix joined Early Edition on CSNNE Thursday evening, and says that while Westbrook and Griffin are both not be available.

Instead, he expects the Celtics to revive trade talks with the Bulls and 76ers for guard Jimmy Butler or forward Jahlil Okafor -- a deal he believes could be completed by as early as tomorrow.


"Boston is being aggressive," Mannix said. "The word out here in Las Vegas at the summer league is the Celtics are trying very hard to make a deal in the coming days, possibly as early as tomorrow. I don't think Westbrook or Blake Griffin are the current targets. I think you have to look at the suspect mentioned in the past, at the Bulls, at Jimmy Butler. I think you have to look again at Jahlil Okafor in Philadelphia, a guy who is very much available. I think you can even consider the possibility of Kevin Love. Those are three guys I would certainly keep my eye on in the coming weeks."

Mannix isn't ruling out the possibility of Oklahoma City wanting to trade Westbrook within the next couple of months -- same goes for Los Angeles and Griffin -- however, for now, Mannix believes both guys are not on the trading block.


"From what I've been told, I don't believe Blake Griffin is available at the moment," Mannix stated. "That could change in the coming weeks and months, but from my understanding the Celtics and Clippers have not discussed a deal anytime recently with respect to Blake Griffin.

"Russell Westbrook, another player who has not been put on the market at this moment. Equally as important, I don't believe the Celtics have received any kind of indication from Russell Westbrook's camp that he would be willing to re-sign there in the offseason, which I think is going to turn out to be a big sticking point. I'm highly skeptical that either one of those players, at the time, could be headed to Boston."

After signing Dwyane Wade and Rajon Rondo, it would be a surprising move to see the Bulls deal Butler away before the start of the season. Although there have been reports out of Chicago that head coach Fred Hoiberg and Butler didn't necessarily have a strong relationship, the Celtics would have to send over a very convincing packaged deal to sway them into sending over Butler.

Butler is set to make $17.5 million next season on a contract that ends in 2019 -- when he can opt out at $19.8 million and become a free agent. Butler's is not only an elite scorer, he's a good two-way player who finished on the NBA All-Defensive 2nd Team last season. He averaged 21 points, 5.3 rebounds and 4.8 assists last season.

The 76ers and Celtics reportedly discussing a deal on draft night before talks fell through before Boston selected Jaylen Brown at No. 3. If the Celtics were able to swing a deal for Okafor, he could complement Al Horford in the frontcourt at the center position as a low-post scorer and a solid young rebounder.

Okafor will be entering his second NBA season and is signed through 2019 -- he finished his rookie campaign averaging 17.5 points, 7 rebounds and 1.2 blocks.