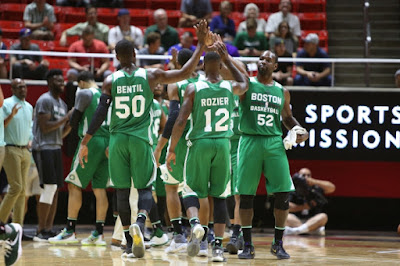 After blowing a 15-point first half lead, Terry Rozier was determined to push his team to a perfect 3-0 summer league record by scoring seven consecutive points in the final minute -- leading the Celtics to a 87-86 win against the Spurs.

In what was by far his best game this summer, Rozier finished with 23 points, 7 rebounds and 6 assists. After the Spurs went on a 9-3 run and grabbed a six-point lead (86-80) with only 1:10 left, Rozier attacked the hoop by scoring back-to-back layups -- that went unanswered -- and a game-winning 3-pointer with 1.8 left on the clock. Although was fouled while shooting the 3-pointer and missed the freebie, first-round pick Guerschon Yabusele pulled down the rebound and ran out the clock.

Spurs' third-year forward Kyle Anderson flirted with a triple-double (23 points, 10 rebounds, 7 assists) and late first-round pick Dejounte Murray had an impressive outing -- he scored 21 points on 8-of-12 shots and pulled down 5 rebounds.

San Antonio erased their double digit deficit in the second quarter but never led by more than two points in the second half until their crucial 9-3 run that started just before the 2-minute mark. Anderson and Murray led the way -- scoring the majority of their points in transition and from the charity stripe.

Still, Rozier's confidence gave him the strength to take matters into his own hands in the final minute, while the Celtics made defensive stops on the opposite end to close out the Spurs. San Antonio went scoreless throughout the game's final 1:10.

Rozier continues to lead this young summer league squad and talked after the game about how hard he's working towards earning an increased role with the Celtics next season. He mentioned the loss of Evan Turner to free agency and hopes it will open up more playing time for him.

So far, Rozier has certainly shown confidence in his ability to facilitate the floor, attack the basket and rebound the ball. Rozier is averaging 19 points, 6.3 rebounds and 5 assists in summer league play.


Click the video below to check out Rozier's game-winning 3-pointer: