Jae Crowder on Kevin Durant joining the Warriors: 'It was a slap in the face for us' 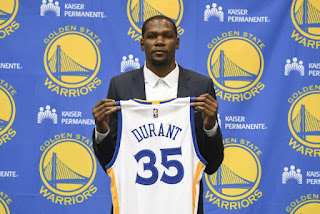 Before speaking at the 60 Days of Summer event in Springfield, the Celtics forward expressed his frustration with Durant's choice and revealed what turned out to be one of the Celtics' biggest selling points.

Crowder, who was a part of the Celtics' meeting with Durant over the summer, believed the meeting left a lasting impression on the NBA's most sought after free agent. He expected Durant to either sign with the Celtics or stay with the Thunder -- Crowder told his inner circle those were the only two teams he envisioned Durant playing for next season.

"I came home after the meeting and told them, like, if he leaves, he's coming to us," Crowder said before a 60 Days of Summer appearance at the Naismith Memorial Hall of Fame. "But I didn't think he was leaving." [Masslive.com]

Crowder says him and the Celtics went to great lengths in trying to convince Durant to come to Boston. Not only did they mention the fact that the Celtics were the only team that beat the Cavaliers and the Warriors away from home, but they also went through actual game film with Durant and gave away their secrets on how to defend Steph Curry and Klay Thompson.

The fact that the Celtics exposed their defensive gameplan for the Warriors -- is what angered Crowder most when he found out Durant agreed to head to Golden State one day after his meeting with the Celtics.


"We were the only team in the NBA to beat both (Cleveland and Golden State) on their home court -- the only team in the NBA, the Boston Celtics," Crowder said. "We told him that. We played him clips from both games and told him basically the scouting report of how we guarded Steph (Curry) and Klay (Thompson) -- our entire game plan, basically. That's what made me mad. We (expletive) told him everything we do to beat these guys, and we beat them, and he went and joined them. I mean, that's part of the process, but I did not think he would go to those two teams... I felt like awkward. I was talking to Isaiah, like, maybe after you sit back, you shouldn't have told him everything, but who the (expletive) thought he was going to Golden State, realistically? It was like a slap in the face for us, basically." [Masslive.com]

Like many, Crowder doesn't like the 'if you can't beat em, join em mantra' and says most of his NBA friends agree with him.


"The team is for sure the villain of the league," Crowder said. "Every other NBA guy, friend of mine, are really disgusted from how the league is turning on that standpoint. Everybody is joining together, everybody wants to go to Golden State or Cleveland." [Masslive.com]