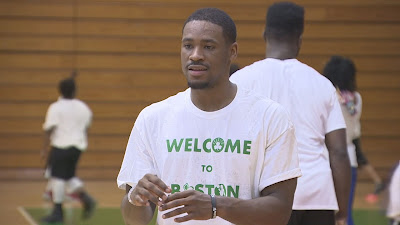 The Celtics are set to sign point guard rookie; Demetrius Jackson to a four-year, $5.5 million contract, according to ESPN.


Details of the deal were first reported by the Boston Globe, the 45th overall pick in last month's NBA Draft will earn an average of $1.3 million per-year.

The 6-foot-1 guard averaged 5.3 points, 2 rebounds, 1.3 assists and 1 steal in eight games for the Celtics during summer league, while playing 16.6 minutes per contest.

You may be asking yourself why has Jackson has received such a 'high' paying contract [equivalent to a pick taken in the late teens] for a second rounder, who usually sign for two-guaranteed years?

Just a year ago, Danny Ainge selected Marcus Thornton also at No. 45 and the Celtics have yet to sign him. Instead he's been stashed in Australia for further development.

Then again last summer the C's made Jordan Mickey [who was selected at No. 33 in 2015] the richest rookie taken in the second round at the time with a 4-year, $5 million contract. The 6-foot-8 power forward did spend much of 2015-16 season with the Maine Red Claws of the D-League, but his future could mean more minutes in Brad Stevens' rotation.

As for Demetrius Jackson, his rookie season could mirror the same as his second-year teammates to the trips up north, especially if Terry Rozier continues to fight for a rotation spot.

For now, the move to sign Jackson for the additional two-years at first round money [just as Ainge did with Jordan last year] gives the Celtics the control over their Bird rights long-term by the end of the respective deal.

If Jackson [another ball-handler that Ainge is still in the market for] or Mickey turn into major contributors this season or beyond, the Celtics will have first dibs [or first refusal, however you want to look at it] when they become potential free agents down the road.

Of course all this is a 'Big if' but it's good to see Ainge is covering all bases while most may be left scratching their heads.