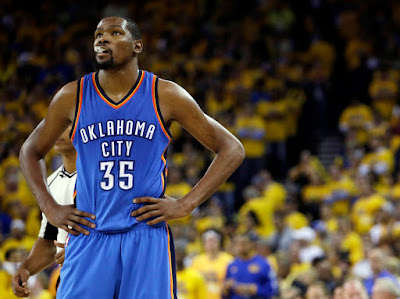 At the end of the day, not even Tom Brady or David Ortiz could convince Kevin Durant to sign with the Celtics.

Durant has agreed to sign a two-year, $54.3 million deal with the Golden State Warriors -- a contract that includes a player option after the first year.

Despite the Celtics' effort of bringing future NFL hall-of-famer Tom Brady along with them to the meeting with Durant at the Hamptons, and asking MLB superstar David Ortiz to have a conversation with the newly acquired Warrior, Durant took to the Players' Tribune Monday morning to announce that he will be leaving the Thunder.


"This has been by far the most challenging few weeks in my professional life," Durant stated. "I understood cognitively that I was facing a crossroads in my evolution as a player and as a man, and that it came with exceptionally difficult choices. What I didn't truly understand, however, was the range of emotions I would feel during this process.

"The primary mandate I had for myself in making this decision was to have it based on the potential for my growth as a player -- as that has always steered me in the right direction. But I am also at a point in my life where it is of equal importance to find an opportunity that encourages my evolution as a man: moving out of my comfort zone to a new city and community which offers the greatest potential for my contribution and personal growth. With this in mind, I have decided that I am going to join the Golden State Warriors." [The Players Tribune]

CSNNE's Abby Chin, tweeted out this following on Saturday -- where Tom Brady was photographed alongside Celtics president of basketball operations Danny Ainge along with Marcus Smart and Kelly Olynyk.


Red Sox DH David Ortiz attempted to recruit Ortiz to Boston via Twitter, and told WEEI that the city of Boston deserves a guy like Durant.


"Boston deserves it, man. Fans here deserve that," Ortiz said. "They deserve the best athletes to come around and perform for them. Fans here are real fanatics. I have played in different cities and what you get here is special from the fans.

"When something like that to be put in place, I'm down with it. My people are here. There are real fans here."

Yo @KDTrey5 sorry I couldn't make the meeting today but Brady will tell u they don't call Boston the City of Champions for nothing 🏆🏆🏆
— David Ortiz (@davidortiz) July 2, 2016

In the final hours, it reportedly came down to three options for Durant -- the Warriors, the Celtics, who signed All-Star Al Horford on Saturday, or returning to the Thunder.

Durant, who has decided to team up with back-to-back MVP Steph Curry, Klay Thompson and Draymond Green in Golden State -- has assembled arguably the most dominant NBA starting lineup in recent history.