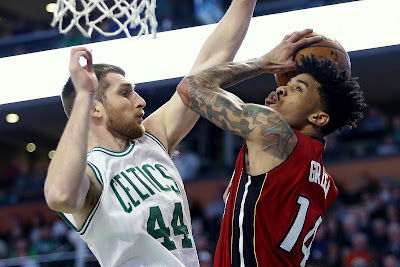 With not a lot of players to choose from left in free agency, the Celtics decided to bring back an old friend and re-signed one of their own to add depth to the front court of their roster.

Celtics and free agent forward Gerald Green have agreed to a 1-year deal, worth $1.5 million, according to ESPN Boston's Chris Forsberg.

And according to ESPN's Ramona Shelburne, the Celtics have extended a two-year deal, worth $16 million with the second year as a team option, to center Tyler Zeller.


Green, who the Celtics drafted at No. 18 in the 2005 NBA draft, played two seasons in Boston before being dealt to the Timberwolves as a part of the Kevin Garnett 2007 blockbuster trade. The journeyman has played for six teams since the last time he wore a Celtics uniform -- including stops with the Rockets, Mavericks, Pacers, Suns and the Heat -- where he played for last season.

As a productive sixth man/starter, Green averaged 13.8 points and 3 rebounds in two seasons with the Suns before playing for the Heat last year -- where he averaged 9 points in 22.6 minutes a night throughout the regular season. However, Green was eventually replaced by Justise Winslow and Josh Richardson in the depth chart by the start of the postseason -- where his playing time dipped to 9.2 minutes a night.

After finishing the 2015-16 season as one of the worst 3-point shooting teams in the league, the Celtics hope Green can recapture the outside shooting touch he had in Phoenix -- where he shot 40-percent from deep in the 2013-14 season -- the best season of his career. That year, he averaged 15.8 points for the Suns and was a starter in 48 of the season's 82 games.

At age 30, Green is entering his 10th season and is a career 36.1 percent shooter from behind the arc.

Bringing back a back up center like Zeller gives the Celtics flexibility in more ways than one. At $8 million, Zeller's contract is a team-friendly deal in the NBA's new market and if the Celtics were to deal one of their other front court players, Zeller has proven himself enough to earn a spot in coach Stevens' rotation.

Throughout the 2014-15 season, he averaged 10.2 points and 5.7 rebounds for the Celtics and became the team's starting center before last year's offseason when the Celtics signed free agent Amir Johnson.

With the signing of Al Horford and guys like Johnson and Kelly Olynyk in the fold, there's still isn't a lot of minutes for Zeller. Still, the signing exemplifies his value to the Celtics and gives them much needed depth in the front court.