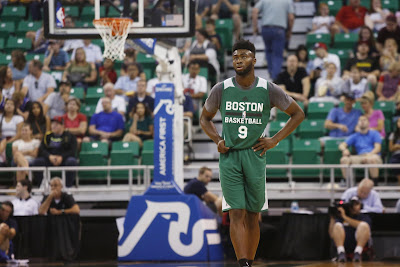 Celtics rookie Jaylen Brown has impressively demonstrated his strongest qualities as a basketball player -- proving to fans why the Celtics selected him at No. 3 in this summer's NBA Draft.

In four games, Brown has displayed his ability to get to the free throw line, finish strong at the rim and provide superb one-on-one defense -- easily his greatest strengths as a young NBA player. Due to his athleticism and knack for contact, the Celtics (4-2 overall) have been able to control the pace of the game and attack opponents in fast-break opportunities when he's in the game.

However, this summer Brown has also exposed the biggest flaw -- shooting. While he's not afraid to take open shots, Brown hasn't been making them -- shooting a woeful 24.3 percent on 9-of-37 attempts.

Brown -- who hyperextended his knee in his summer league debut against the 76ers -- forcing him to miss two games -- recovered nicely by showing off his high-flying abilities in his last outing, against Dallas, while making defensive stops and getting to the line.

Brown (20 points) scored 12-of-17 from the free-throw line on Tuesday in an 88-82 win against the Mavericks. He also pulled down 10 rebounds and finished with 4 steals -- easily his most impressive performance of summer league play.

He's clearly gifted athletically but is still very raw, offensively. In terms of playing defense while attacking the hoop on the opposite end, Brown will have no problem fitting in Celtics coach Brad Stevens' system. But when opposing teams force him to shoot -- he's going to have to eventually develop a jump shot.

And while he's proven he can get himself to the charity stripe -- he hasn't been sinking them in at a successful rate. Through four games, Brown is shooting 69 percent (29-of-42) from the line. He's averaging 10.5 points, 5.2 rebounds and 2 steals.


"He's 19," Stevens said. "The bottom line is I'm watching a lot of the 19 year olds get more comfortable as the games go on, but none of them are knocking people's socks off right out of the gate. Obviously, he's got a great deal of talent. He's got a great deal to learn to be effective at this level and we'll see. Time will tell."