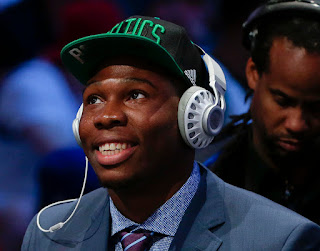 Celtics' first round pick Guerschon Yabusele has agreed to sign a one-year deal with the Shanghai Sharks of the Chinese Basketball Association, according to Boston Globe's Adam Himmelsbach.

Yabusele, 20, who was drafted at No. 16 in last month's NBA draft, hasn't officially signed with the Sharks but according to one source he's expected to make as much as $1.5 million next season. Playing overseas is an option some experts expected the Celtics to head towards with Yabusele -- who many didn't believe he would be selected in the first round of the draft.

Instead of sending the forward to the D-League, like the Celtics have done with their draftees in recent years like Jordan Mickey and James Young, Yabusele will have another year of professional experience as the Celtics' draft-and-stash prospect. The Celtics will of course retain his NBA rights throughout next season.


"I've got to be better and come back better, more stronger," he said last week. [Boston Globe]

The young forward played for Rouen Metropole Basket in the French league's A division last season -- where he averaged 11.5 points and 6.8 rebounds.