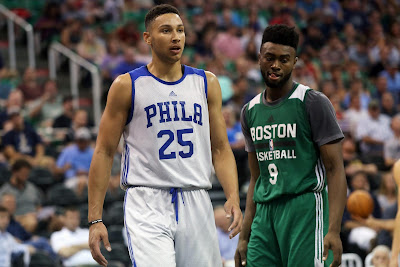 All eyes were on the 76ers' No. 1 overall pick Ben Simmons and the Celtics' No. 3 pick Jaylen Brown in their summer league debut on Monday.

While Brown had a satisfying performance against the top pick in this year's draft, Terry Rozier stole the show in leading the Celtics to a 102-94 win.

Simmons, who left the game with 4:19 left in the fourth quarter due to calf cramps, didn't return and is expected to sit out for Philadelphia's second game against the Spurs on Tuesday.


"I'm good," Simmons said about his cramps. "Just cramps... It's been about four months since I played. That's the main reason. I haven't played in a while." [Celticsblog.com]

Meanwhile, Brown supplied plenty of oohs and aah's in the fourth quarter when he took flight against 76ers forward Holmes on a couple of possessions that resulted in trips to the free-throw line, the two players exchanged words on the second dunk attempt and had to be separated.


"Next time, they might get out of the way," Brown said. [Celticsblog.com]

Brown admitted he was frustrated after his first attempt to dunk over Holmes resulted in a hard foul.


"I could've got a layup, but I was a little frustrated earlier," Brown said about trying to posterize Holmes. "So I decided to just take it out." [Celticsblog.com]

Brown, who picked up momentum offensively after Simmons exited the game, did an excellent job of attacking the rim and drawing fouls. Defensively, Brown excelled in keeping up with his opponents, especially Simmons who he was able to contain at the rim and finished with two blocks.


"I'm just getting used to getting up and down and playing with professionals. So [I'm] just getting my feet went and next game will be better," Brown said. [Celticsblog.com]

While some fans may be disappointed in the Celtics' decision to choose Brown at No. 3, it seems like he's doing his best to impress his new fan base and prove to them he's going to perform at a high level for his new team.


"He's a guy who wants to please," Celtics summer league coach Micah Shrewsberry said of Brown. "This was a hyped matchup. He was just trying to settle in. He made a huge shot." [Celticsblog.com]

With a two-point lead in the final two minutes, Brown along with Rozier and Hunter led a 12-3 run -- which extended their advantage to a 98-91 lead. Brown caught an alley oop and scored most of his points on the night from the charity stripe.

The Celtics will face the Utah Jazz on Tuesday in their second game of their summer league schedule.


Click the video below to see Brown's defensive stop on Simmons in the fourth quarter.