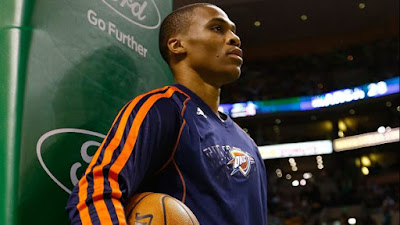 The Oklahoma City Thunder have reportedly placed All-Star guard Russell Westbrook on the trading block in hopes of trading him before the start of the season.

According to Bleacher Report's Howard Beck, the Celtics are considered to be the top suitors for a potential Westbrook trade.

In a video that was posted on the site, Beck said he believes the Thunder may not be confident that Westbrook will want to stay after next year -- when he will become a free agent -- and expects Thunder GM Sam Presti to make a deal long before Westbrook's contract expires.


"Let's just say there's a very strong suspicion, a strong belief among rival GMs, that Russell Westbrook is not intending to stay, that he would leave next summer when he hits free agency," Beck said. "And because of that, the logical next step is that [Thunder GM] Sam Presti -- who is always ahead of the curve on these things -- will look to trade him. I don't know that that's happening right this moment." [Bleacher Report]

Beck added that he's been hearing from NBA GMs that Oklahoma City would like to make a deal before the start of the season.


"Not only do they think Westbrook will get traded, [but] that it'll be sooner rather than later, probably before the season starts," Beck said. "And that the most likely destination right now would be the Boston Celtics.

"That's not surprising. Anybody following the NBA the last couple of years, we know Boston has been loading up on assets. They have a ton of picks, including great picks from Brooklyn Nets, and a bunch of young players. They have the ability to create a package that could get Westbrook there without giving up key pieces. They could still have Isaiah Thomas. Al Horford, who they just signed, they could hold onto Jae Crowder presumably and add Westbrook to that. That's the concern or the challenge for any team trying to trade for Westbrook: Not only do you have to be concerned about his free agency next summer, and you're going to want some assurance that he'll want to stay, but you have to be able to trade for him and still have enough players for him to play with when he arrives." [Bleacher Report]

There's no question the Celtics have the best assets to make a deal for Westbook -- the combination of future first-round picks and young talent will intrigue any team that's heading towards a rebuilding phase. With the loss of Kevin Durant to free agency and the possibility of losing Westbrook next summer, the Celtics have what the Thunder need to build their roster.

However, the threat of losing Westbrook to free agency next summer makes the potential deal a risky move for the Celtics. With the salary cap expanding next season, Westbrook is expected to not sign a contract extension with any team until next summer -- when he'll be able to make a lot more money.

Westbrook, who is coming off arguably his best season -- he averaged 23.5 points, 10.3 assists and 7.8 rebounds last year.