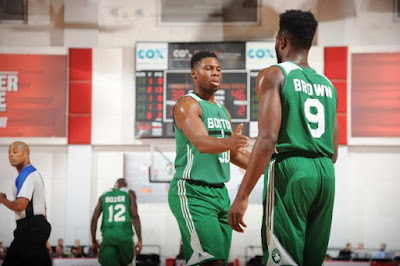 After finishing the Utah Summer League with a perfect 4-0 record, the Celtics were bounced out of the first round of the Las Vegas league playoffs and closed out their Vegas schedule, 1-4.

But instead of looking at a team's record at the end of Summer League, we're going to focus on how these young players looked individually. There's plenty to say about this young Celtics roster -- here are five of the biggest takeaways from Celtics Summer League:

1. Terry Rozier is ready for a bigger role

With Evan Turner gone, Terry Rozier has already voiced his desire for an increased role next season with the Celtics and used the Summer League's platform to prove why he's ready to step up to the challenge. Rozier was the team's MVP this summer -- averaging 20 points, 5.3 rebounds and 3.5 assists. As a floor general, Rozier set up his teammates, provided scoring and also made stops on the opposite end. He also proved he can score at the rim and has an outside touch -- something the Celtics are always looking for off their bench.

Although cracking the rotation is going to be tough with Isaiah Thomas and Marcus Smart ahead of him on the depth chart, Rozier is certainly a candidate to grab Turner's leftover minutes.

As one of the most unpopular first round picks in recent Celtics history, Jaylen Brown entered Summer League with a chip on his shoulder and proved to his naysayers how valuable he can be for the Celtics next season. Brown -- who was projected to be selected outside of the top-5 by some draft experts, fared well in summer league against the two draftees that were selected before him -- Ben Simmons and Brandon Ingram.

Brown displayed his freakish athleticism, quickness to get to the hoop and ability to create contact. He scored 20-plus points in back-to-back games and got to the line 36 times in three games -- easily his most impressive stat of the summer. His ability to attack the hoop is certainly what he does best.

However, if he's going to become a vital piece for the Celtics next season, it's going to be his one-on-one defense that'll get him there. Brown finished with a combined 7 steals in his last two games against the Cavaliers and Blazers -- he applies his quickness and great footwork on the defensive end by staying in front of his opponent and clogging the passing lanes. His biggest flaw? Shooting. Yes, Brown is not an effective shooter but his ceiling is still very high. Regardless, as Jae Crowder's back up, Brown is expected to be a nice spark off the bench for the Celtics next season. 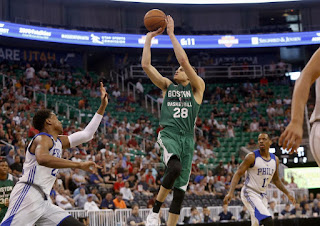 After finishing the 2015-16 season as the second worst 3-point shooting team (33%) in the league, the Celtics are in need of a reliable deep shooter. R.J. Hunter, who is entering his second season, is capable of being that guy and proved it this summer when he shot 45-percent on 11-of-24 3-pointers in five Summer League games. A right wrist injury sidelined Hunter for three games but when he was healthy, he was certainly effective.

With Avery Bradley out for the series, coach Brad Stevens turned to Hunter for scoring against the Hawks in last year's playoff series and Hunter answered the call -- getting his first taste of playoff basketball. He combined for 2-of-6 from the floor in Game 1, 2, 3 and 5 but his playing time came in spurts, due to the fact he couldn't keep up on defensive assignments and after fairly quiet performances in four of the series' first fives games, he was ultimately benched for Game 6. The taste of playing in big games should motivate Hunter in his sophomore campaign. Especially since Hunter shot 30.2 percent from beyond the arc in the regular season -- he's going to have to shoot better next season if he wants to see more playing time.

Besides his outside touch, Hunter doesn't bring much else to the table but if he can perfect his shot -- it'll be enough to keep him on the floor. He may be a one-trick pony, but that one trick is one the Celtics desperately need.

As much as draft experts predicted Guerschon Yabusele -- who was drafted at No. 16 -- to be a draft-and-stash player to the contrary, don't be surprised if, at some point, you see Yabusele's name make its way onto the 2016-17 Celtics roster. Don't get me wrong, Yabusele will either spend most of next season in Maine leading the Red Claws to a D-League championship, or playing for a club overseas. However, he has the kind of game that reminds me of a young Zach Randolph. -- the type of game that will flourish in the NBA someday.

Yabusele averaged 8.2 points, 6 rebounds, 1.1 steals in summer league play. At 6-foot-8, 270 points, he can score in the paint and has a good knack for using his body to box out and pulled down boards. Another Randolph trait is his outside shot and ability to defend taller opposing big men. The Frenchman has a bright future ahead of him and with the departure of Jared Sullinger, he could get his name called before the end of next season for a backup role at the power forward position.

Since 2014, the Celtics have been patiently waiting for James Young to blossom into a bonafide scorer. Last season, we saw him leapfrogged on the depth chart by rookies like Terry Rozier and R.J. Hunter for playing time and didn't see much improvement in this year's summer league. Young has proven he can knock down 3-pointers -- but not as well as Hunter -- and attack the hoop -- but not quite as well as Rozier or rookie Jaylen Brown.

Young has yet to separate himself from the pack. His game's biggest strengths are over-matched by his peers and as he heads towards his third NBA season -- the last year of his contract -- the Celtics may opt to deal the young 20 year-old or waive him by the end of the preseason.