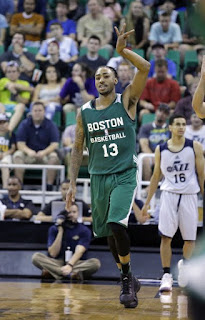 The Celtics improved to 2-0 in summer league play after defeating the Utah Jazz, 89-82 Tuesday night in Utah.

Yabusele finished with 18 points, 8 rebounds and 2 blocks. The No. 16 overall pick was aggressive on offense and helped keep the Jazz at bay in the fourth quarter, along with James Young -- who scored a team-high 17 points, including 4-of-5 from deep.

After a quiet first half where he knocked down two 3-pointers, Young picked up momentum in the second half where he scored 11 of his 17 points. Terry Rozier continues to show leadership at the point guard position as the floor general in these summer league games -- he may have only finished with 4 assists but he made an impact on offense by facilitating the floor and creating space by using his speed and off-the-dribble moves to get past his defenders.

Trey Lyles -- who scored 13 points in the final frame -- scored a game-high 26 points for the Jazz and helped erase a nine-point fourth quarter deficit that was topped off by Dionte Christmas' 3-pointer with 4:11 left, tying the game at 76 apiece. Christmas finished in double digits with 14 points for Utah.

Then, Yabusele and Rozier picked their defenders apart by attacking the hoop and getting to the free-throw line -- which made it a two-possession game (84-80) before Young's dagger 3-pointer from the corner gave the Celtics an 87-80 lead with 18 seconds left.

The Celtics will look finish with a perfect 3-0 record when they conclude their Utah summer league schedule on Thursday night against the Spurs.