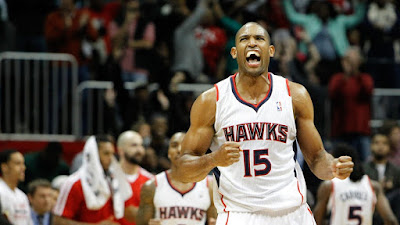 The Celtics and Danny Ainge were finally able to reel in the big fish on the free agent market, by signing perennial All-Star forward Al Horford to a max free agent contract on Saturday.

This is by far the biggest free agent signing in the history of the Boston Celtics. Horford took advantage of the Celtics' deep pockets this summer and inked a four-year deal worth over $113 million.

Horford is a four-time All-Star who averaged 15.7 ppg and 7.3 rpg  and will bring a veteran leadership to a team that desperately needs it. Horford will fit right in with the Celtics' up tempo offense and will split time between power forward and center.

No longer can Boston be labeled as a city that doesn't attract free agents. This signing changes all of that. Horford was arguably the biggest free agent on the market after Kevin Durant and LeBron James and he is on his way to Boston.

So after a lackluster draft and two straight off seasons of whiffing on big name free agents, Danny Ainge has finally been able to redeem himself to the fans. It will be extremely fun to watch Horford adjust to being the number one big man scoring option on the Celtics. His numbers will almost certainly increase this year under Brad Stevens and knowing he doesn't have to compete with Paul Millsap for touches.

Even though Horford is not the difference maker that will instantly turn the Celtics into a championship contender, he makes the Celtics look like a franchise that players want to go to and that is a huge barrier that has now been broken.