Should the Celtics Make A Play For RusselI Westbrook? 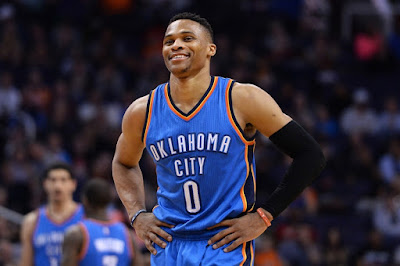 The Celtics missed out on the Kevin Durant Sweepstakes, yet they still may not be out of the running to acquire a OKC Thunder superstar.

Durant's former running mate, Russell Westbrook is up to be a free agent next summer. The Thunder  flat out can't let both Durant and Westbrook leave in free agency and be left with nothing in return. They may be forced to trade Russell Westbrook this year if they can't convince him to sign an extension, which by all accounts, isn't happening in OKC.


It's no secret that Danny Ainge has the assets to get the deal done to acquire Westbrook should the Thunder make him available. They drafted a ton of young players over the past three years, have two remaining Brooklyn picks available to trade, and the thirst to acquire that all-world kind of player.

This trade would be a major risk/reward situation for Danny Ainge and the Celtics, but it is one that he should make. Theoretically, Ainge could try and low ball the Thunder who basically have no leverage. (Thanks, Kevin!) The Celtics are in the best position to move assets and still be set in the years to come. A package of  Avery Bradley, Marcus Smart, Jaylen Brown, and 2018 Brooklyn and either 2018 Celtics or 2019 Memphis pick (sneaky good pick) would be my 'Godfather Offer', if I were Danny Ainge.

Even if you have to make the 'Godfather Offer' and sacrifice some depth, you would instantly become a contender to knock off the Cavs with the addition of Westbrook. The starting lineup of Westbrook, Isaiah Thomas, Jae Crowder, Al Horford, Amir Johnson would be pretty devastating in the Eastern Conference. Yes, you probably would lose some depth at the guard spot, but Westbrook would be eating up so many minutes it wouldn't matter anyways. Additionally, the Celtics drafted Terry Rozier last year in the first round to give you this opportunity to deal some of the depth, so Ainge has it lined up perfectly. 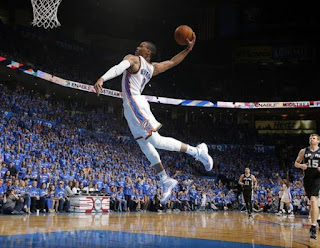 Westbrook is the kind of player you sell the farm for. He is an absolute game changer, he is a top-4 player in the NBA and is ready to take over. Could you imagine Russell Westbrook in complete and unapologetic "Revenge Mode". He already has a bone to pick with the Warriors after what happened in the WCF, and of course he can't be happy with Durant. I'm sure he doesn't forget 2012, when LeBron made them look silly in the Finals, he's gotta be on the list somewhere too.  If the Celtics are able to acquire him in a trade, I believe it could be the start of one of the best single statistical seasons in NBA History. Who better to knock off the unbeatable team than the guy who was ditched to make it happen? Seems like something that now just has to happen.

The kicker here is that a trade for Westbrook would only guarantee the Celtics one year of the All-NBA point guard, with no assurance that he would sign a long term deal.  Celtics nation may be a little weary because of that, but would it make Ainge think twice about the deal?


Ainge once said he would have no problem trading for a superstar that has only one year left on his deal when the Kevin Love sweepstakes was in bloom.  Westbrook is a different cat though. He is always looking for the spotlight, and he has been linked to Los Angeles and New York in his impending free agency in 2017.  The whole reason he was going to leave OKC was because the market just wasn't big enough for him. At first glance it may seem like there is no chance for him to stay in Boston, but the whole landscape is changing right before our eyes. 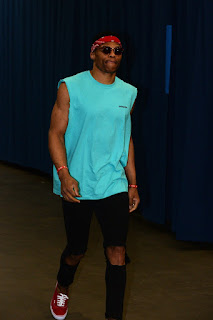 The Celtics finally got a major free agent in Al Horford. They were in the running for the Kevin Durant and if you believe all the talk they probably finished second in that sweepstakes. There is a track record that once great players come to Boston, and see how amazing it is to win here they usually stick around. Let him take over the Garden on a nightly basis, and see how hungry this city is for another championship. Allow him to play not for a transplanted franchise in a small city who is just happy to have a team, but a major metropolis who has the most prestigious NBA track record of all time. Oh, and did I mention the Celtics play in the Eastern Conference?

Ainge has been too cautious in the past with his beloved assets, but now is the time to gamble and make the major play for Russell Westbrook.