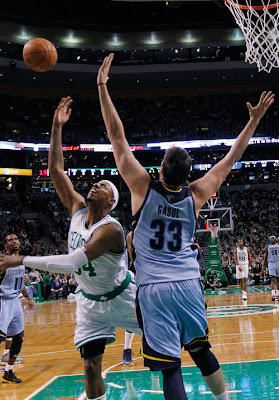 The frustration is building at the TD Garden, as the Celtics lose their 4th straight game. It was a familiar story line yet again. The Celtics get down by double digits, try to make a comeback in the fourth, but simply don't have enough steam to overcome the odds.

Memphis defeated Boston 93-83 , spoiling the return of the Celtics defensive stalwart Avery Bradley. Bradley finished the game with only four points in limited minutes, but did show signs of what he can bring to the table. 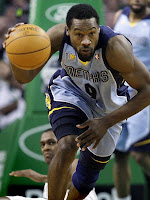 Going into the game you would have figured the Celtics would have no answers for Z-Bo or Gasol, but they were actually held in check by the Celtics Bigs. Instead it was Rudy Gay and Mike Connely who finished the game with 19 and 23 respectively. Tony Allen also had a huge game with 15 points, 5 rebounds, and a handful of defensive plays that really frustrated the C's.

The Celtics started and finished the game strong, but really let their guard down in the second and third quarter. The Grizzlies outscored Boston 50-33 in those two quarters, which eventually was too big of a hole to climb out of.

The Celtics had a tough time finding offense all night. Pierce started scorching hot, scoring 15 in the first half but then had only 2 points in the entire second half shooting 1 for 6 in the second. Garnett struggled with another pedestrian game with 12 points and 7 boards. 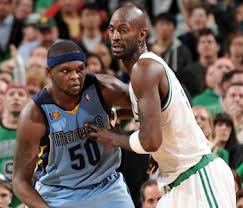 Double digit deficits seem to be a nightly occurrence for this club as of late. They were blown out and looked dead in the water on their west coast trip, and came home for more of the same. The Celtics have lost by double digits in every game on the 4-game skid.

There are a few things in the loss that Doc and company can look at and build off of, including that fight that the Celtics showed in the fourth quarter. Down 16 when the 4th quarter started, Boston fought their way back led by Garnett and Jason Terry.  They got it as close as five points after a pair of Terry three balls. The defense was great in that stretch and the Celtics went on a 17-4 run.


However, the Celtics went cold when their "leader" Rajon Rondo jacked up a three, which was short, early in a possession that turned out to be a deflating error by the point guard.  Rondo also had an awful game on the defensive end letting Mike Connely do what ever he wanted all game. He couldn't stay in front of the ball and really seemed disinterested on both ends. Just getting 10 assists every night may not be enough, he needs to improve his overall game and effort if the Celtics are to have any chance on improving their positioning in the playoffs, which currently is the 9th seed on the outside looking in.

The road doesn't get much easier with a back to back this weekend . The Celtics have a suddenly hot Indiana Pacers team on Friday, then take on the Atlanta Hawks Saturday. Scary to think what will happen if they drop both of those games. Danny may be on the phone, and some major changes could be on the horizon.