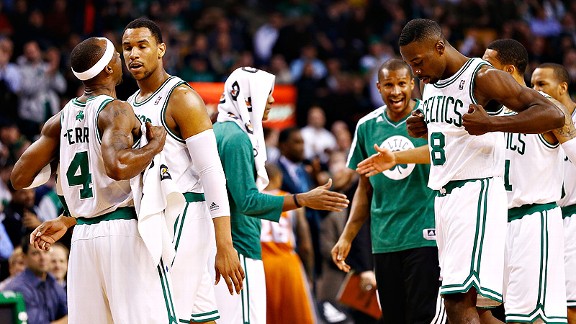 We all know what happened with the Celtics in the lock-out shortened season of a year ago.  It was an ugly start to the season and the Celtics were limping into the All Star Break at 15-17. There were rumors of blowing up the nucleus and trading away Ray Allen, Paul Pierce, and even testing the waters on Rajon Rondo.

Led by the rejuvenation of Kevin Garnett and his move to the center spot, the Celtics racked off a 24-10  record to end the season and secure the 4th spot in the East. Now we wont go into how it ended for the Celtics against the Heat, but everyone wrote them off as a one and done midway through the season. If a few calls went there way in Game 2 in the Eastern Conference Finals we could have been able to blame their slow start this year on a Championship Hangover.

However, it was strange to see the Celtics get off to such a slow start after upgrading what seemed to be their biggest weakness in last years post season. They added to their bench a slew of veterans, athletes, and rookies to improve on what was an abysmal group from a year ago. The expectations were high and it was a virtual lock for the C's to come out the gate hungry and determined to avenge their loss to the Heat in the ECF in a new, full, NBA season.

The slow start killed any momentum they had going into the season. Kevin Garnett and Paul Pierce, the backbone of the Celtics, looked old and slow. Rajon Rondo showed flashes of dominance but seemed to be disinterested in some games and was worried more about his stats, rather than wins. Jason Terry, Jeff Green, Courtney Lee, and Brandon Bass were all underwhelming, inconstant, and in some games down right invisible.

They looked like a pretender of a team on their west coast trip after Christmas. The stunning loss to Sacramento was a microcosm of their season up to that point. They played down to their competition, got out hustled, out rebounded, and flat out beat up in that game.

So what is behind the recent resurgence of the Celtics? It's not Garnett finding the fountain of youth, like he did a year ago. It's not Paul Pierce scoring 30 ppg, like we've seen him do in stretches this year. It's not Rondo dishing out double digit assists. It's the insertion of two unsung heroes that have truly led the Celtics season revolution.

The C's were in need of something or someone to come save the season. Avery Bradley returned doing his best Batman impression and along with Jared Sullinger's  Robin-esque emergence rescued the C's  'Gotham-like season'.

Corny Batman references aside there is no denying the effect that Bradley and Sullinger have immediately made on the Celtics. 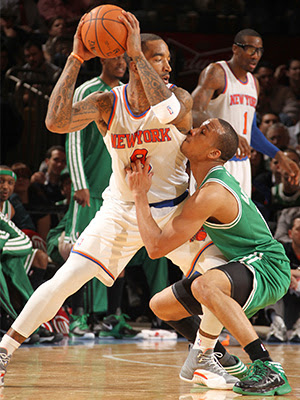 It's hard to believe that Bradley who has only played about 20 minutes a game is the main reason for the turnaround, but there is no denying to overall affect he has had on the Celtics as a whole. His return to the starting lineup is allowing Doc to solidify the roles  for his bench. As Terry, Green, Lee, and even Leandro Barbosa, now know what they can expect on a nightly basis, their games have drastically improved.

The obvious impact Bradley has made on the Celtics is on the defensive end. His intensity guarding the opposing teams ball handler, and making them work the entire length of the floor is beneficial for the Celtics in multiple facets of the game.

It forces the opposition to rush their sets and force the ball into spaces they may not want to get in due to only having about 14-16 seconds to get a shot up by the time they get the ball over half court. Also his full court pressure allows Rondo to settle in his most effective defensive role as an off ball defender and get into the passing lanes.

Take a look at the defensive stats in the Celtics 6  game winning streak. It's impressive to think how much they have improved defensively since the streak began.

They are only allowing opponents only 83.5 ppg, well under their season average 95.9 ppg given up. The most alarming stat here is the rebounding advantage they have enjoyed over the past 4 of 6 games. It has been the Celtics biggest weakness during this season and last, where it seemed like they would win despite always getting out rebounded by their opponent. This is where Jared Sullinger shows just how important he is for this teams success going forward. 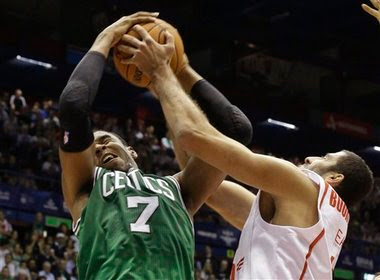 Sully has adapted to the NBA a lot quicker than many have thought he would after falling into the Celtics lap on draft day. He is showing his ability to be in position constantly for the rebound on both ends of the floor. It will be something to watch once he stops picking up pesky fouls,which is limiting his time on the floor, and see him play more minutes and not worry about foul trouble. He is glad to do the dirty work in the paint and it is that type of toughness the Celtics have been lacking.

I'm not giving all the credit to Bradley and Sullinger for the 6 game winning streak but it is important to note how huge it is for the Celtics to get big performances from these two gritty players. They do the things that most professional ballers shy away from. They are not in it for the stats or records, just to insert themselves into the game and truly make a difference on the outcome of the game.

Also you cannot ignore the ability for the entire second unit to come into the game, give the starters a rest and not only keep a lead but extend it. Jeff Green has finally been more that just a dunker, and has consistently looked like a offensive threat game in and game out. He is now a full year away from his heart surgery, and hopefully continue to prove the enormous contract given to him this year.

Courtney Lee has shown flashes of being a solid contributor on both ends. He is even starting to hit that corner three that he was brought in to make, and really struggled with in the beginning of the season. When he and Bradley are on the court together, he is able to use his athleticism on the defensive end and team up with Bradley to cause fits for the opposition. Lee is feeding off Bradley's work ethic on the offensive end too, as he now is moving and cutting with out the ball and is finding himself on the opposite end of a Rondo assist.

As much as the NBA is talked about as a star driven lead, it is the role players and team mentality that have gotten the Celtics to turn the corner. It will be pivotal moving forward for the Celtics to not let their guard down as they will need to improve their playoff positioning to have a chance to get back to where they were less than a year ago.