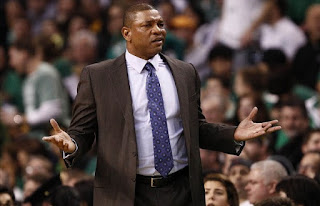 Rondo was suspended for making contact with official Rodney Mott in the third quarter of last Saturday's game against the Atlanta Hawks. Rivers was asked if he thought the NBA was in the right for suspending the point guard hours before his big game against the New York Knicks.


"He did something wrong, but he didn't do enough to get suspended would be a better way of putting it," Rivers said. "When you walk up on a ref you put yourself in a position to get a technical or be suspended. Now, you could see when you watch it, the official was walking towards him as he was walking toward the official. They just kind of ran into each other, it wasn't as if Rondo bumped him."

Hawks general manager Danny Ferry gave the video of the bump to the officials following the game. The officials then sent the video to the NBA. Upon review, Rondo was suspended Monday afternoon. Rivers commented on Ferry's actions.

Danny Ferry was fined $15,000 by the NBA, for what their calling "inappropriate interaction with game officials."

Great to see Doc pretty much call Ferry a hater without literally calling him a hater. As Rivers said after the Knicks game regarding Garnett and Anthony, "If this were the playoffs, I would say something." In other words, I'm not going to say or do something that isn't beneficial to my team.

Hey Ferry, you got Rondo suspended, great but how does this effect your team, again? It's not like the Celtics are beating the Hawks in yet another playoff series all over again. It's obvious Ferry isn't a big fan of Rondo. Especially since the last time Rondo was suspended for making contact with an official, it also took place in Atlanta so maybe he thought to himself if it happened once it can happen again. The NBA then gives Ferry a $15,000 snitching fee. Ha, you gotta love it.

As for Monday's post-game encounter between Garnett and Anthony at Madison Square Garden, Rivers was quick to deny the report regarding Anthony's wife, La La Vazquez and a certain General Mills cereal.


"I know what's being reported did not happen. I know that as a fact," Rivers said. "You know how this works, a guy does something crazy like Carmelo did, and the way to get out of trouble is to say someone else said this. It happens all the time. And what bugs me about this is that this is not a Kevin Garnett issue. And it was made into one and it shouldn't have been made into one."

The NBA announced yesterday, that Carmelo Anthony has been suspended for one game for his actions on Monday. Knicks will be without Anthony Friday night when they take on the Indiana Pacers.