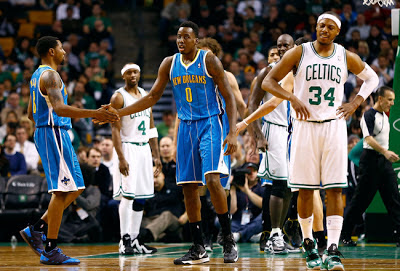 In a surprising defeat, the Hornets ended Celtics' winning streak at six games at TD Garden last night as the Celtics came out flat offensively in the second half and loss to a team with only a dozen wins this season.

Greivis Vasquez led his Hornets with 15 points and 11 rebounds. Al-Farouq Aminu, who has been inconsistent for New Orleans this season, scored 18 and Robin Lopez chipped in with 17 points.


Kevin Garnett outscored his teammates with 15 points but only grabbed four rebounds. Paul Pierce out rebounded his teammates with 10 but only scored 12 points. Celtics couldn't find consistency throughout the second half. While looking like they were one run away from tying the game up, the clock ran out and the Hornets maintained their double-digit lead for most of the fourth quarter.


"We weren't making shots," Bradley said. "And we can't let that affect our play and energy."

Although no one on the Celtics could get going offensively, the defense was lackluster against New Orleans. The Hornets couldn't get many three pointers to fall but did take a lot of them. Hornets were 2-for-17 from behind the arc but scored many of their points in the paint. 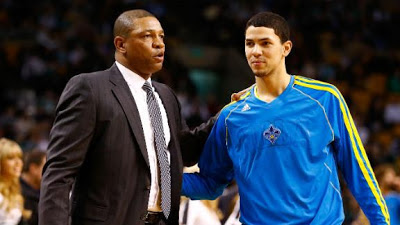 Celtics took the Hornets lightly. And when they need Pierce to get it going offensively, he couldn't. And neither could anyone else.

Rivers, who was coaching against his son, rookie Austin Rivers, said it wasn't the most pleasant experience he's had.

"It's just a strange dynamic. I didn't enjoy it, honestly," coach Rivers said. "I know it's neat for everyone else but, as a father, I don't know if I enjoyed that"

Austin Rivers, who has been struggling this season and lost his starting job, scored eight points off the bench in 22 minutes. He spoke to his father briefly before the game but didn't talk much during the game. The two embraced afterwards.


"He just told me to compete. And that he loved me," Austin Rivers said.

Coach Rivers is the fourth coach to face his son in an NBA game. He joins Butch van Brenda Kolff, Mike Dunleavy and George Karl.

Jason Terry led the bench in scoring with 12 points. After not scoring a single point in the previous game it was nice to see Terry give the team something. Terry's disappointing season continues. His role as an instant offense sixth man has let Celtics fans down, and it's games like these where the Celtics could use an offensive lift from The Jet. Terry played 24 minutes last night. While Barbosa, who has struggled to get himself into the rotation this season, scored seven points in less than three minutes. It wouldn't bother me to see Terry's minutes decrease. Maybe it will spark a fire under him, because nothing else seems to be working for Jason.