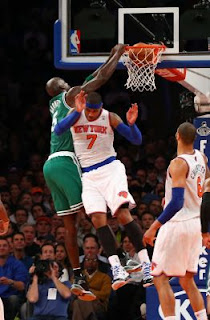 Celtics bullied the Knicks, without their point guard Rondo, into playing their style of basketball at Madison Square Garden, while Kevin Garnett got the best out of Carmelo Anthony on and off the court.


"It was like being in the schoolyard," said one witness to the incident.

MSG Network reported the incident, in which security and New York City Police officials had to send Anthony back in the right direction. The two were going back and fourth with each other throughout the game and were handed double technical fouls.

Kevin Garnett and Paul Pierce picked up the scoring for much of the second half and into the fourth quarter. Pierce finished with 23 points, and Garnett had himself a double-double with 19 points and 10 rebounds. Pierce, who got into foul trouble in the third quarter, scored eight in the last ten minutes of the fourth quarter. 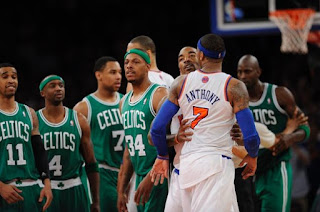 Anthony scored 20 points for the Knicks but shot 6-for-26 from the field. It was his worst shooting performance of the season. He struggled to score in the final minutes of the game and so did the rest of his teammates. J.R. Smith led the game in scoring with 24 points.

Anthony left Madison Square Garden without talking to reporters and the Knicks wouldn't comment on the incident. Coach Rivers chose not to comment but didn't deny that the incident took place.

"I'm going to let you all figure that one out. I'm going to stay out of that," Rivers said. "If it was the playoffs I'd tell on him, but since it's not I'm going to just be quiet." 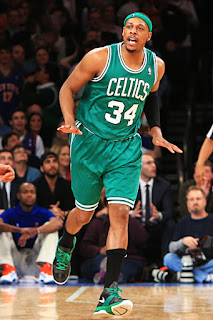 Sounds like coach might have been taking a shot at Danny Ferry's snitching on Rondo by handing over a video of Rondo's brush with an official that got him suspended for Monday's game against the Knicks.

When asked about the altercation, Garnett downplayed the incident.

Knicks led throughout most of the first half but the Celtics never let the score get out of hand. The Rondo-less Celtics applied tenacious ball pressure to the Knicks point guards, Jason Kidd and Pablo Prigioni.

They forced Knicks' trigger happy shooters Anthony and Smith to take jump shots. They successfully scored a handful of points in the first half, but that couldn't carry it over into the second. By the time Pierce and Garnett were on a roll, Knicks couldn't score a bucket.

Celtics' three-game winning streak marks the most consecutive wins for the C's this season. Next game will be at home, Wednesday night when they take on the Phoenix Suns.

Beating the Division leading Knicks was huge because it sends a message; don't count us out. Celtics beating New York on their floor without Rondo proves that this team has taken big strides since their four-game losing streak last week. Bradley has some to do with it but I see a big change in the attitude of the bench. Jared Sullinger continues to improve as he scored 10 points and grabbed five rebounds. But it isn't the things that show up in stat sheet that's raising my eyebrows, it's his physical play that's making him better. He's becoming tougher against his opponents. Whether it's on the offensive end or defensive end, Sullinger finds a way to get involved... Jeff Green led the bench last night and filled up the stat sheet with 16 points, six rebounds and three assists. Maybe all it took for the young fella to buckle down and focus was hearing his name tossed in recent trade rumors.